Mess-tra at the Soca Monarch Semis 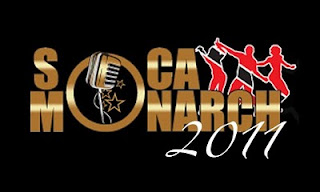 Who knew the Soca Monarch semis would have attracted so many fans especially since CNC decided to broadcast the Grammy awards instead of the bigggest show to hit Arima. I didn't watch the entire show because the power 106 stream was not the best and the show was extremely long but I was grateful for the little I could catch...I was also able to catch some of the rebroadcast on CNC the following day. My Mom is right when she says that competition always brings out the worst in people and boy did it bring out the worst in Destra. But her behaviour should not surprise us since we've always heard about incidents where her true colours came out...(the 2004 incident with Denise belfon and the cursing incident at the trini posse fete). What I don't understand is that Ms. garcia swore that she would never enter the competition since the judges "cheated" her the last time she entered, but that $2 million dollars could make a dent in her daughter's college fund. It is clear that Destra has too much ego for a competition since she is completely unaware that there are artistes who are better performers or who have better songs than her. Her performance was lukewarm; again she depended too much much on the hype and glamour and too little on singing the damn song. Destra needed to stop talking all that crap about Machel and Faye Ann and perform. It seemed that she was frustrated that she could not get the same reaction that Faye Ann and Bunji got and resorted to low blows. And what was the deal with her trying to ad lib on stage??? fail!

Now on to a real performer, Ms. Lyons; dressed in a black tank top and pants, the only prop she had was her sneakers! No frills, no fuss, she just sang "Consider it done" and let the crowd do the rest for her. Bunji was also able to mash up the velodrome with a simple performance focusing on lyrics and vocal skill. Now the man to watch out for is the Boss; I am not a fan of Iwer George but Iwer has Soca Monarch experience and has his followers, and I have to admit that "Come to meh" is one of his best songs to date. In my opinion, Destra cannot be considered a serious entrant compared to these 3.


Mr Machel did give an okay performance but like Destra, he had to try too hard to get the crowd hyped. At first I didn't think Soca Monarch would be a problem for the HD but the Soca Monarch crowd is not a One fete crowd or a Tribe Ignite crowd; I don't think that it's going to be easy for him no matter how many props he brings on on the night. Faye Ann, Bunji and Iwer all have Soca Monarch experience which Machel lacks as a competitor. The three have their die hard supporters and they know what the crowd and judges want. Backing tracks, lip syncing, and sexy dancers would only get you so far.


My picks for the finals are Faye Ann, Bunji and Iwer for Power Monarch, and Kes, Kerwin Du Bois and Shurwayne or Destra for Groovy.


And I just heard it's about TT$680 or something like that for the platinum section! I don't know about that! But since Machel in the Soca Monarch, there are a lot of people who would never even consider this event on their Carnival Friday line up and would go platinum....I admit, I have not been to SM since 1997...mostly because I could not handle the roughness but I always enjoyed watching the broadcast.... but this year the competition is fierce and I want to be there...

The soca monarch image and list of finalists can be found on the official soca monarch website.
Posted by cute dougla at 7:43 AM