Your Guide to Carnival in Jamaica 2012

I'm not in Jamaica right now so my posts about their Carnival have been limited. However, I will be back at the end of the month with much to talk about. So if you are new to the carnival, here's my take on the major events:

Mas Camp Fridays- Stadium North
These weekly parties aim to get the crowd hyped for Carnival and sometimes feature a live performance from a popular band or artistes. I'm not a regular at Mas Camp because the DJs shy away from the latest tunes, but I'm there once a good band is featured.
Cost-
JA$1000 without performers (presold)
JA$1500 with peformers (presold)

Island Mas'Soca Village- Village Blues Bar
Kudos to Island Mas for introducing something new to the Carnival scene. Their weekly Saturday fetes are reasonably priced and the soca selection is much more contemporary.
Cost- JA$500

French Lyme- Barbican Beach
March 21st/28th, April 4
This fete is hosted by Frenchmen and the Ambassadors and promises only 2012 soca. This should be good.
FREE

Soca Vs Dancehall- Devon House
March 24th
I'm sold on this fete probably just on the drink selection. I really hope that music is also good and focus is placed on soca and not on the dancehall since this is the carnival season.
Cost-
JA$2000 (females)
JA$3000 (males)

Sundown Cooler Fete- Constant Spring Golf Club Pool
March 31st
This fete is advertised as being in association with Scorch (from T&T), so it must be good right? There will also be music by Shotmaster J from T&T's RedFm, so the selection should be on point. For cooler fetes, I just need three things- my bottle of johnnie, coconut water and a cup!
Cost- JA$1500

The Cooler fete- Drax Hall
April 6th
I love the concept of a cooler fete so I think this fete will be a great addition to the line up. The fete has advertised Iwer George, Kees and Xcaliber. However, I heard that Kees was not booked for the event so I don't know if we should expect too much. But this issue with Kees should be addressed.
Cost-
JA$500 (early bird)
JA$1500 (pre sold)
UPDATE: Kes the Band will not be at this fete, but Iwer George and Swappi. However, they are still advertising DJ Private Ryan, who tweeted that he will NOT be there...hmmmm

Beach Jouvert- James Bond Beach
April 7th
Thank God, Machel Montano will be there especially after that disaster last year with Destra. But this is usually a great party, great vibes, lots of drinks and plenty paint. You may want to consider going with a bus or stay overnight at a hotel. Check out Soca Republic's for their bus package and Jamaica Grande for their special Bacchanal Jamaica rate.
Cost- JA$4000 (presold)

Soca by the Sandbar- Lime Cay
April 11th
This is a cool day fete at the beach if you are lucky enough to miss work that day. It's a free event but you'll need to pay for transport to get there.

Frenchmen's Blocko- Jack's Hill
April 12
Honestly, I've never been to this fete but it has received good reviews from its regulars.
Cost- TBA

Bacchanal Jouvert- Stadium North
April 13
I've never been a fan of this Jouvert and I really don't know why. This year Destra and her band will be there...and we know exactly how that will go
Cost- JA$2000 (pre sold)

Sunrise Breakfast Party - Constant Spring Golf Club
I don't have all of the details for the breakfast party but I know that J-Lava from Dei Musicale will be playing. But I am very interested to see if the breakfast party concept will take off in Jamaica.
Cost- JA$2000 (females)
JA$2500 (males)

Island Mas' Water Party- New Kingston Gold Academy
April 14
If you like wildness, then this is the party for you. Water, alcohol and girls in skimpy clothes tend to bring out the worse (or best), but I look forward to the pics. Also, look out for a performance from JW and Blaze....
Cost-
JA$1000 (pre sold)

Frenchmen's Bazodee- Cherry Gardens
April 14
If you've been following my posts, you would have concluded that this is my favourite fete of the season. Like the Blocko, you have to reserve the tickets. I'm not sure what's the cost this year, but this is usually an expensive venture because it's all inclusive.
Cost- JA$6500

Road March
April 15
Ofcourse you need your costume, plenty vibes and plenty action...
Posted by cute dougla at 11:26 AM No comments:

It's really sad that in Trinidad and Tobago, there's a concept such as "soca switch". If this is the home of soca, why is there a need to "switch"? But if the people who could change this, do not care to change it, then soca will remain the genre that could...But for people like me, soca is 365, whether I'm in T&T or in Jamaica.

But this post is about my fave songs for 2012, so let's move on. Even though 2011 saw the best that soca has to offer, 2012 wasn't too shabby. It must be noted that 2012 was the year of the groovy with very few power songs to talk about. I was even secretly hoping that a groovy would have won road march. Ultimately there's something definitely wrong with the power tunes and it seems like that formula needs revisiting.
I am Soca- Patrice Roberts and Kerwin Du Bois
This is my absolutely my fave song of the year! I felt like if I were a writer, I would have written this song. Loving soca is all about being soca...
Bacchanalist- Kerwin Du Bois
Let's just say that Kerwin was like the salt of soca this year- in every ting! writer, producer, singer, and pleasing to the eye. This song is definitely my 2012 anthem as it embodies how I feel about Carnival and the whole idea of revelry. The first line of the song is also unforgettable- "Hello and greetings, first time we meeting, ah hope yuh not leaving, just stay a lil bit...". In fact, all of the songs on that Antilles riddim are great- Erphaan's In your Eyes, Nadia's Shiver and Machel's Vibes Cyar done...

In your Eyes- Erphaan Alves
I LOVE this song! This is what a groovy song is supposed to sound like- feel good catchy lyrics with amazing vocals. Erphaan has been doing his thing from school's soca monarch and has come a long way as a writer and singer. Soca has to watch out for this young man...

The People's Champion- Benjai
This tune maadddd! I used to think that Benjai was cheesy. I mean who still has gold teeth? and what about that blurry tattoo on his neck? But after an unforgettable song like Trini, it would have been difficult to follow it up with another hit. But it seems that not winning competitions is an inspiration for many tunes...so I can't wait to see what hit he'll come up with after taking 3rd place at the soca monarch groovy...

Bubble on a DJ- Swappi
Swappi is one of this artistes you don't want to like. Sometimes I feel sorry for him because he was not born in Jamaica, but so it go (you are not Kartel). But this tune is a reall bruk out tune. It really makes women feel that they can wine on anything, and men wish that they were DJs...

Stress Away- Kes the Band
You know I must have my boy on this list. So he didn't do too well at the soca monarch but Stress Away (not the remix with Snoop) is a great composition with a creative video. Why can't I be carelessly walking down the street and led to a secret tea party with Kees? Yes, I'm serious. But the line I love in the song is -"For all di suckers dem, ah bring cockset!"

Miss Behave- Faye Ann Lyons
For the rest of the year, this song will be known as "the people's road march". I'm not going into the archaic criteria for choosing the road march winner, but for some reason, the DJs decided that this song will not be played while bands crossed the stage. I'm gonna behave this year and move on...

Come to Meh (part 2)- Iwer George
I know this post is about my fave songs of 2012, but I have to mention this piece of nonsense composed by Iwer. He's lucky that he came second at the soca monarch because if it was up to me, he would have been placed last without apology. How you could sing verse 2 of your song from last year and expect to win? Nah man Iwer, this is not diesel, you can't get off so easily...

Any song by Machel Montano
I will say this many times- there's no one who could match the skill, consistency, originality and professionalism of Machel. Even if you don't like his personality (and I don't know why you would, unless you know him), you cannot dispute that he is way ahead of all of the current artistes in the game. Bottle of Rum, Mr Fete, In charge, Vibes Cyar Done, Represent, On the Avenue, Revelers, Make yuh Rock and PYF reflect Mr HD's versatility and ability to turn out hit after hit in one year. For all his critics in the industry, stop hating and try to learn how it's done.....
Posted by cute dougla at 8:59 PM No comments: 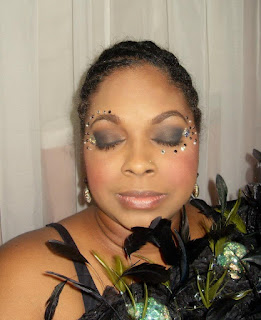 After a reader of the blog suggested the Peavy tights, I decided to purchase a pair from Carnival Kicks. I wasn't too sure about the shades, but I think that the Pecan shade in the Peavy is equivalent to the Salmon in the Micles. I paid US$12.99 which is a lot for tights, but Farrah from CK promised that it would be worth it since the denier was higher making it "run resistant". When I got home on Tuesday, there was absolutely no runs in the tights, and can even be worn again. A definite thumbs up for Peavey!
Boots
I am hoping that this was a bad batch of Carnival Kicks' jump up metallics because the boots were ruined while trying them on. Most of the metallic of the pewter boots flaked off before I even wore them, and by the time I got them on, there was nothing on the back. I know someone who got the gold and experienced the same problem. However, the problem only seems to be with the metallic, and the suede ones are fine.
Makeup
I am glad that I decided to stick with Makeda from Shades of Sugar because this was her best work yet. I finally got there early for once! I now see why masqueraders do their makeup early-it's less hassle and you get enough time to meet up with your band. As I said before, this was my fave costume ever and the make up completed the look. I also used the "No Sweat", which is designed to wear under costume make up and wigs. I really like the product, and it works better than the milk of magnesia. I will be using it again for sure.
Sling Bag
I already featured my Bacchanal Divaz bag in a previous post. The bag went well with the costume and held all of my essentials with lots of extra space.
I will now be prepping for Carnival in Ja, so stay tuned for updates and reviews....
Posted by cute dougla at 4:56 PM 3 comments: