Unfortunately, my bf's grandmother died about 5 weeks ago here in Jamaica. I was then able to experience the rituals involved in a Jamaican funeral which is an interesting research subject. The most shocking aspect was that the funeral was held 4 weeks after the death. This delay allows for family members from all over the world to get time off from their jobs and fly in. It also allows time for the family to get the large sum of money needed for the funeral. The relationship between the "foreign"family and the local family during the planning stage is also noteworthy. The foreign family sends a list of demands for the funeral that they believe are in good taste and can't be left up to the home based family such as the type of coffin, the style of car to be used as a hearse, options for a mourning car etc. It is assumed that the home family cannot make such decisions since in most cases the overseas family will cover most if not all of the cost.

Once the date for the funeral has been set based on the approval of the foreign family, there's much back and worth about the details of the funeral...who will read the eulogy? tributes? verses? sing? dance? pall bearers? do we need a glass chariot? (yes, a glass chariot), who will host the nine-night and the repass? etc.

On the week of the funeral, it's all about finding accommodations for the foreign based family, as well as getting them from the airport. This task can difficult because everyone comes in at different times and depending on the size of the party and their luggage, it may require more cars or more living space. Once family members are here, it also means getting them around Jamaica to see all the people they need to see and feeding them their missed local dishes on a regular basis.

Before the funeral, a nine night is held where family members and friends visit the home of the deceased for several nights. The nine night I attended was not so much like a wake but more like a "session". Yes, there was the traditional tent with people singing hymns but there was also a DJ and a live band that led the singing of the hymns. In addition, there was a lot more than the staple fish and bread but drums cooking pan chicken, a big pot of manish water, curried goat, roast breadfruit, fried chicken, rice and peas, green salad and dessert.

The following morning we were at the funeral for a service which lasted almost 3 hours. However I was told that this was a very short service because it can last up to 4 or 5 hours...wow... Following the burial, we headed a family member's home for the repass or gathering for family and close friends. Food is also served at a repass but like any large event with free food, greediness is always present...and no offense to my church going peeps but church people is the greediest people in the world...I've seen it too many times to say it's just a coincidence. Imagine the church had their own bus to transport their congregation to the repass even though most of them did not know the deceased. And they eat their belly full; even asking for seconds and plates to carry home for their families! and without any shame! don't you feel ashamed or a little guilty for imposing on an intimate family gathering and eating food that was not catered for you????

Greediness at a funeral is not specific to Jamaica ....there's just shameless greedy people all over the world and I hate it! But i did enjoy seeing the family get together and celebrate rather than mourn their mother and grandmother. It made me think a lot about family in Trini and how much I take them for granted sometimes...life is short and unpredictable...so let's make the best of it and appreciate all of our blessings :)
Posted by cute dougla at 9:05 AM 2 comments: 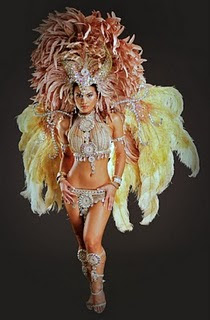 YUMA's Taurus is one of my all time fave Frontline costumes. It really does epitomize the fabulousness that a FL costume should portray: the large plume feathers, a sensible and attractive mix of colors and a non traditional bikini top. A FL costume should also provide distinctive details on the belt, headpiece, as well as on the neck, arm and leg pieces that sets it apart from the Backline version.... It shouldn't look like the BL costume with more feathers. If you opted for this FL, I hope that you got all of the pieces; I don't think I would like it without the backpack. However it would set you back TT$4790+ TT$1200 (for the backpack). As I told a friend...if yuh want Frontline costume, yuh betta have Frontline wallet!....
Posted by cute dougla at 2:48 PM 1 comment:

This Carnival Rewine Fete Now has my Attention!

After trying to find out about Gems Jamaica....I was still hesitant about their Carnival Rewine party. But then I found this in my inbox:

EVER HAD "BAKE & FISH" ?, HOW ABOUT DOUBLES, OR CORN SOUP.......DELICIOUS TRINIDADIAN DELIGHTS ON SALE BY CUDDY'Z SPORTS BAR.

I'm guessing that the "Bake and Fish" is an alternative to bake and shark...but the doubles and corn soup...wicked! I've had trini food from Cuddyz (owned by Courtney Walsh) and it was really impressive. I know that the manager is trini so these dishes should taste like they're supposed to. So most likely I will be checking out Rewine, not just for the music but for the food....
Posted by cute dougla at 5:36 PM No comments:

I've been hearing about this Carnival Rewine on Facebook for a while....I have not heard of Gems Jamaica but I'm guessing it's a new Carnival organization...so Gems, hit me up and give me some bio.

I'm glad that there's someone trying to promote Carnival outside of the season in Jamaica. I'm really tired of some Jamaicans boasting that they LOVE Carnival so much and they are Carnival "to de bone" (no offense to my JA peeps)...but after easter, I don't hear anything from them until February. The truth is that many of them believe that Carnival and soca is seasonal. To me, if you are such a soca "addict" then that addiction should be 364/5...that's just my opinion.

I hope that Gems ensure that the DJs are highly soca educated and don't play the same 10 songs in between a dancehall set. We know they love Roll it Gyal and the Destra but they are so many other songs. Also, songs from 2010 are welcomed...if you don't know it...find it!