Not Much to say About Spice... 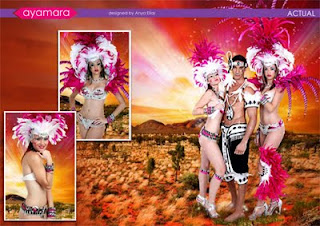 I don't know what's up with Spice but their costume presentation for next year can just be described as "blah". It seems that 2009 will remain Spice's best year. I wish I knew what's going on with the band but something is not happening. I suspect that part of it has to do with the loss of Richard and Anthony because the costume designs have certainly done a nose dive. Don't get me wrong, they are not horrible but they're just generic. I'm most disappointed with the lack of color in next year's presentations. What's up with all the blue? Some people have described the designs as "safe" which is correct. The presentations we've seen from Bliss and YUMA this year, and from Tribe's recent launch should have been a wake up call for Spice yet we see the standard Spice costumes. I've always liked Anya and I felt that she had a fresh perspective on band leadership but my girl is not a designer.


My favorite section is Ayamara simply because I love the combination of the burgundy and white and the FL is gorg. Also worth mentioning is Siriono which was designed by Leasel Rovedas and does not have feathers. It looks okay although I'm not a fan of black costumes. Overall Spice continued their trend of blinged out costumes, but with skimpified bottom pieces so I'm sorry for the Heavy Ts. Again, the saving grace for these bands are their prices and extra options. Spice does the corset well, which is great since most women do not look like the models at the launch...so when are you going to post these prices Spice?

**This pic of Ayamara is from Trinidadcarnivaldiary
Posted by cute dougla at 6:24 PM No comments: 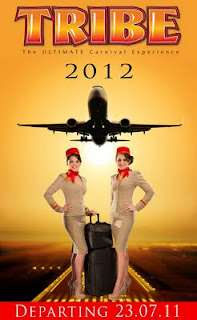 Although I am not a big Tribe fan, I am excited to see how their 2012 costume concept comes to life for their launch on July 23, 2011. I am even more excited to see how crazy people will get to secure a Tribe costume. It's clear that Tribe has staying power; no matter how expensive or overcrowded this band gets, it just seems to attract more and more people. And even with the advent of new large bands, it has not lost its appeal. The few people that do decide to migrate to these new bands are quickly replaced by masqueraders who are willing to sell their kidneys, house and mother in a heart beat to secure a costume. Even after people complain about Tribe, they then find themselves 5 months later with a severe case of Tribenesia, fighting to get back in the band they swore never to play with again....
Posted by cute dougla at 9:47 AM No comments: