Since Tribe, Spice and Fantasy launched, I'm tired of critics complaining about the lack of originality in the bikini mas, the loss of "carnival culture" due to the dominance of bikini mas, and the loss of "Trinidadianess" in the production and design of costumes. Now what is mas culture in Trinidad? There's no one representation as culture evolves and becomes different things at different times. The political, social, religious , global, and technological issues of the time influence how a cultural tradition is conceptualized, created and interpreted. Basically our society is changing and it is inevitable that Carnival like almost every other aspect of society will undergo change. However, I'm not saying the we discredit our traditional Carnival, but to accept that it has undergone change.

First of all, we have to accept that our costumes have been bikini based from the 1980s, which means that we have had almost 30 years of this tradition; so why condemn it? It is also a known fact that women have dominated Carnival during the same period, so it is expected that the costumes will remain in the bikini trend. Carnival has always been a site of resistance, mimicry, masquerade, revelry, gender inequality and identity transformation and none of these have changed in the contemporary Carnival.  In addition, modern feminism has moved away from the belief that in order for women to be taken seriously, our bodies must not be a distraction. As such women do not need to feel ashamed about their bodies.  For some, this can be a literal interpretation of a "freedom to the flesh" or " carne vale". What is also important to note is that as women lewdly display their bodies on the streets of Port of Spain, they are challenging their unequal status in everyday life. They ultimately decide who would be the victim of their vicious skills while "bracing" some men, and they are mostly to be found in the company of other women. Then they put on their best business attire for work the next day to continue in a job that paid for this freedom. The power to choose is the most important action here- the choice to display their bodies without fear.

The traditional Carnival has always been scandalous and in poor taste.  For example the pissenlit bands of the 1870s were about men portraying blood stained menstrual cloths which was a sure way to upset the Victorian ideals of the time.  Carnival also never used original ideas. The pre 1980s saw the precedence of sailor, Native American, African tribal, devil, and animal inspired themes; none of which are original. Carnival costumes "portray", so it must be based on an interpretation of a concept, thus it is subjective.  Carnival is a masquerade, thus we adopt an alternate identity. And where is it written that we can't recycle, reuse, revisit and reinvent? Fashion does it all time.  However I do acknowledge that bands need to start thinking outside the box and change up the game.  For years they've argued that the younger masqueraders want the bikinis, but I don't think that this is completely true since we've seen masqueraders supporting non bikini mas.

If you didn't get the memo, we are living a global economy. Ultimately, globalization, free trade, competition, bottom line ( and all the other economics jargon) will affect the business of Carnival, in the same way it has affected other industries.  This era has made many jobs useless, so why don't we expect it to do the same where Carnival is concerned? The fact is that it is cheaper and more efficient to produce costumes in China. Why is it then that we don't have a problem with all our souvenir key chains, fridge magnets, dolls, pens, tshirts, bags, pot holders, cups, mugs, coasters etc being made in China? And yes, there's very little need for wire benders for bikini mas ( i guess if they may be needed with the rise of the cage bra).   But I don't see the outsourcing of costumes as a "loss of culture". The technology of the culture has changed but it doesn't make our Carnival less Trinidadian.  The passion that we bring to Carnival cannot be imported from China or Rio; that passion is purely Trinbagonian. How we parade, wine, grind, let loose and throw our worries away is what we bring to the Carnival and imports have never taken that away from us, and we have not let them.

Whether you like it or not, culture evolves.  Some of us may feel a sense of loss because we are always nostalgic about the past. What is more important is how we use the technologies of change in the interest of our people. We may no longer need wire benders but there is potential for new entrepreneurial and artistic skills. Why aren't we marketing Carnival to tourists? What is wrong with a 2nd Carnival in Tobago? Why aren't we hiring qualified persons without political affiliations to run various Carnival bodies?

And since we are on the topic of the government- they can ensure the preservation of our Carnival history through education in schools, preservation of artefacts, support for re enactments, training, regularizing imports, quality assurance, upholding consumer rights, support for research and documentation, a Carnival institute, and I can go on....

My point is that we can use inevitable change in our favour to create and sustain the Greatest Show on Earth... 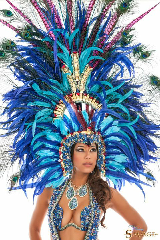 Well after Spice's an Tribe's launch in the last week, one thing is clear- The bikini, beads and feathers costumes for Carnival 2013 will be uber skimpy. The body wear for these costumes have taken on new cuts that can make even slim chicks feel conscious about their bodies. I already see them obsessing over the gym and fitness classes; you better include jogging, aerobics, zumba, weights, boot camp, pilates, trx, glide, insanity, p90x, hip hop abs, kickboxing etc. So make sure you up your workout to 7 days (twice a day) and don't forget you will need to diet. I hear that the HCG produces results in a short time- especially if you have a preference for apples and lettuce. If not, there's always the Master Cleanse, Lemonade diet, Salt water cleanse, baby food diet, Grapefruit diet, 7 day color diet, Cabbage soup diet, The cookie diet, Macrobiotic diet, 3 hour diet, Atkins, South beach, Weight watchers etc.  And most importantly, since most of your vajayjay will be exposed, invest in a series brazilian waxes or even better, take off everything... 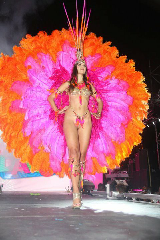 I haven't blogged in forever simply because I didn't have any burning issues to comment on and life has been just about work and my thesis. But you know it's that time of the year- band launching time so I'll be having lots to blog about.

One of the main things that we Carnival commentators look forward to is the launch of new bands. If you've been following my posts, you know that I'm somewhat of a new band expert, but I have to admit that it has been a disappointing and tiresome ordeal.  At the end of all of this, I'm wondering where can I apply for retribution for the pain, suffering and inconvenience? Yes, I made the choice to give these bands a chance hoping for a much better experience, but they took advantage, got my money (usually in the ballpark of US$1000) and I was left with a below average Carnival Monday and Tuesday.

And I'm not tolerant of excuses such as "it's our first year, please bear with us"...bear with you? Because I have US$1000 to just throw away right? I don't know about you, but I have to work extremely hard to save that amount of money. So what do hardworking masqueraders expect from a new band....

Good quality costumes
In 2011, after picking up my gorgeous Titan costume from Bliss, I decided to try it on in the restroom. The braid that held the bra together came apart.  As a result I had to wait several days for them to redo the wholepiece. My weekend fete plans were disrupted since I had to spend most of my time up and down from the mas camp. I eventually got my costume on Sunday night, but to have the bra part detach from the rest of the swimsuit on Tuesday. I ended up writing a letter of complaint to Tribe/Bliss and big surprise- they never responded.

But my first time costumes in Spice (2009's Scotch Bonnet) and this year's Dead Sea from K2K will always remain my faves.
﻿
A Good Road Experience
﻿﻿I had a ball in Spice on the road and the security was tight.  Drinks were always flowing and easy to get.  When we got tired, the rest bus was nearby. We got a reasonable lunch at QRC, but they needed more seating arrangements.  I had a similar experience in Bliss, but blankets and adequate toilets were provided. Fast forward to 2012 with K2K, which was the worst road management I've ever seen. The  trucks met the band at the meeting spot at almost lunch time, so masqueraders had just been waiting for hours with no drinks, music, security or any sign of the K2K team.  Consequently, we were stuck in the savannah jam up and the band hardly moved for the day, so there was no rest stop or "lunch"  until after dark.  I have to admit that the drink service and music were commendable, but where was the security???? The lesson here is that just because a band has gorgeous costumes and great designers, it doesn't mean that they know how to manage the band on the road. The solution was simple- hire someone who can do it; designers are not road managers. We don't see Anya from Spice doing anything else than looking gorgeous on the road...

The Extras
Because we are Trinis and because we pay a ridiculous amount of money to play mas, we expect some extra goodies to make us feel special.  These goodies can range from a bag of free samples to massages on the day.  Trust me, I don't care for condoms, panty liners, gum, bodywash etc., I just want Monday wear and a souvenir cup. Kudos to K2K for being the only band I've played with who offered a real option for Monday wear. It was stylish, suited all body types, went with the theme and gave the band that much lacking uniformed look on Monday. And those other bands better don't feed me any crap about wearing the costume for both days as they very well know the costumes cannot hold up for that long.

I'm sure we are going to see fabulous costumes from these new or almost new bands.  They are going to wow us at the band launches, we will be talking about these costumes for days, even weeks, sharing pics of our fave costumes on various social media, and trying to break barriers stronger than the Mexico/US border to get into certain bands until finally handing over loads of cash. So the bands will always come out the winners- they already have our money and we give them free publicity.  We cuss when we realize that we are being short changed but we do it all again the next year....
Posted by cute dougla at 8:33 PM No comments: