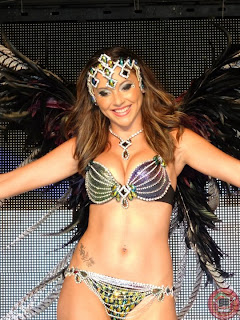 I recently saw this post by Stacy Romano on Trinidad Carnival Diary's FB page:
Okay ......So for the persons who didn't get in Fantasy Band sorry to hear that, in kartel voice "Nat Nice" .......you kno what i realize if you not begging, paying a fee to get in, jumping through hoops or someone on the committee KNoWS YOU masqueraders just don't want to play in yuh band they just addicted to rejection and LOVE to beg to GIVE their money away .........Ronnie & Caro, Island Peop...le, Dream Team, De Krewe, Trini Revellers, Legacy, Genesis, just to name a few-----> let me tell you how to get in Step 1. go view your costume at the mascamp....Step 2. make your deposit ...Step 3. payoff and collect your costumes on said date AND Step 4. play with a crew that is not stuck up, sucky or party poopers and you will enjoy yourselves on the road..........

My friend brought it to my attention since she had recently told me a story about her Jamaican friend who had paid someone who knows someone on Tribe's committee for a costume (in full). When he got to Trinidad, he could not find the person he paid nor the friend of a friend. It was his first time to Trinidad for Carnival and he had heard that Tribe was "de band" to be in. Without question he paid for the costume AGAIN! I found this difficult to believe until she introduced me to the guy who confirmed the story and proudly exclaimed that he will be trying to get into Tribe again, no matter what it takes.
I do sympathize with this guy especially since I had a similar experience. My friends and I had the same desperation in 2006 and paid a guy who knew "someone on committee" full price for Tribe costumes. We were in constant communication with this person and everything seemed to be in place. He even told us he would deliver the costume to our homes on carnival Saturday. On carnival Sunday, we did not hear from him and contacting him proved to be futile. It took us a while to conclude that we were scammed and ended up with no money and no costume.
Since that experience, I've decided to go through the legit process to register with a band. If the band declares that they are sold out, I will move on to another because guess what? there are other bands. But this year after falling in love with Fantasy's costumes, I almost found myself down that that road again. After realizing that Fantasy had no intention to open registration to the public, I contacted a good friend who had been registered through someone he knew on the committee. He confirmed that the band was mostly sold out and that they will not be doing public registration. Still in disbelief, I emailed Fantasy who responded in a timely manner that they will release information regarding registration. This was one month ago. At this point, I don't think anyone in their right mind believes that they can get into Fantasy without pulling some strings. Unlike other people, I am attracted to the costumes and not the hype surrounding the band, but if I can't get my fave costume, I will have to move on....Sorry Fantasy's Ophanim, I really felt we would have made a good match...

***The pic of Ophanim came from Trinidad and Tobago Carnival Costume Photos
Posted by cute dougla at 8:52 AM No comments: 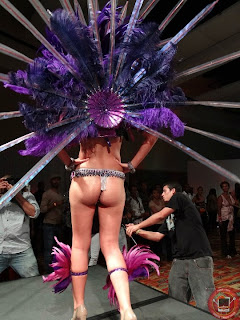 I know that we've had a longstanding commitment but I'm afraid that I may have to bow out next year. You see it has been difficult to acquire a costume for various reasons. I am not friends with anyone who sits on a band committee so I was unable to engage in committee member registration. I don't know if it's the same as preregistration but I was also unable to do that since I don't know any very important persons who run a band.
I was really feeling Fantasy's costumes but apparently the band has sold out even though they have not opened for public registration. After people started getting anxiety attacks over Fantasy's registration, they shut down the wall on their FB page and have been silent on twitter. Even if Fantasy had costumes remaining, they only offer corsets option for 3 sections; 2 of which I've been told are sold out and the remaining section may not have an available Frontline. Now Mas, you know I love you but all mas is not equal and my belly needs to be covered and sucked in.
After Island People Mas' mess of a band launch, they did a remarkable change after consulting their masqueraders and presented something that looks really interesting. I have one die hard IP friend who suggested that I give the band another chance and at least I'll know 1 person. However, I contacted IP who to my disappointment, only has corsets for Ki and Elements, which I wouldn't wear.
I would know a lot of people if I were to play in YUMA but it's the same drama with committee member registration and past masquerader registration yada yada. I am so not into the big band drama and I know that YUMA will be packed up tight tight since everybody and their tantie will be in this band. Furthermore, these people have the audacity to charge an additional TT$650 for a corset and hear the best part- you have to bring your own corset...what de ass YUMA! So mas, do you understand my predicament?
I know there are other bands such as Spice, Explosion and Oasis but it would be nice to play with 1 or 2 people you know....Since we are on the topic of Explosion; have you seen what this band has done to you? Their costumes are all about breasts and bamsee (the pic is from Trinidad and Tobago Carnival Costume Photos). I am one person who can't wait to see the death of the cage bra. I just can't stand to see all the boob fat squeezing through those wires but big up to all de girls who rock the cage bra!
So that's my dilemma and I hope to figure this out by September or you won't see me in 2012...
Regards,
A Masquerader with no Costume.
Posted by cute dougla at 5:37 PM No comments: