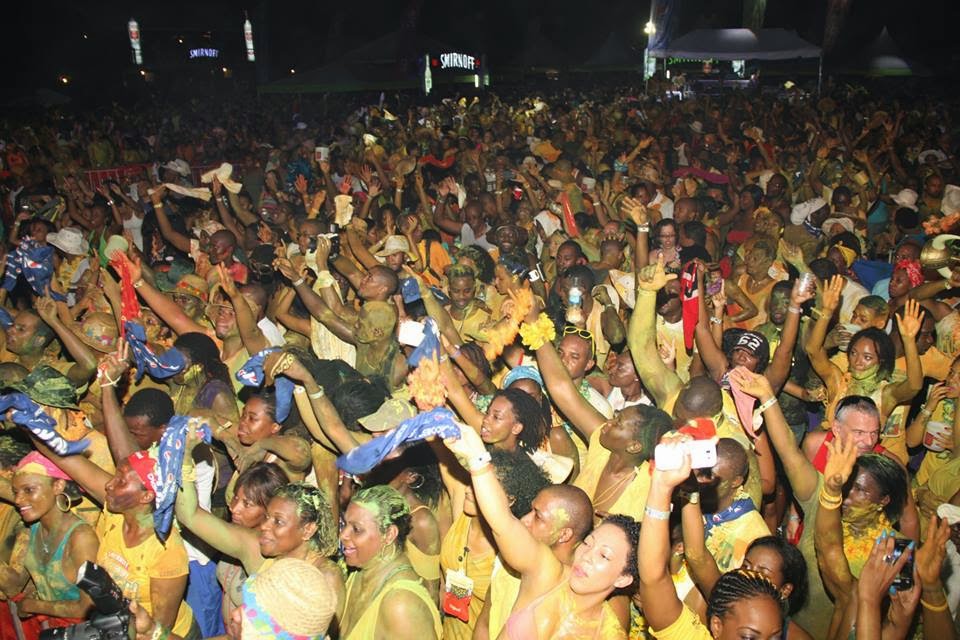 ﻿﻿
At $5500 for drinks only, this party was overpriced, but it continues to attract patrons because the formula works...but hey, you can't go wrong with thousands of drunk people on a beach wining to good soca....
Posted by cute dougla at 11:51 AM No comments:

Red Conquest was the only night I've been to Mas Camp this season.  It was strategic for Bacchanal to leave this night up to Island Vibes who made sure that there wasn't the typical mas camp feel.  The music from Richie R.A.S and Nuphoric from Trinidad did not consider the typical mas camp 12 songs which was a huge relief, not only for me but for a lot of the non regulars as well.

I'm glad that I opted for the VIP which included drinks and food.  I like that the VIP area was set up like a fete within a fete and not just a cordoned off area. I had no problem obtaining drinks directly from the bar or from the assigned servers throughout the night.

The highlight for me was Skinny Fabulous' performance.  It is difficult for a performer without a band to command a huge venue such as mas camp, but I think Skinny did well.  The crowd reception, however was lukewarm mainly because his songs are not as popular among the mas camp crowd when compared to Destra's offerings.  I will leave my comments on Jamaica's love affair with Destra for another post...

I've said many times that Bacchanal is out of touch with what's happening in the contemporary soca scene in Jamaica.  The problem is that they have a huge following who are content with their current offerings and not really open to a non-palance. On the other hand, there's a group of soca lovers who are fed up of the same ole at mas camp and want something more which is what we had on the night of Red Conquest.

Picks for Jamaica's Ministry of Fete

The Jamaica Carnival Schedule shows that there are way too many events and it is impossible to attend all especially if you are living paycheck to paycheck.  And if you haven't been saving, unfortunately, there is only one paycheck to carry you through the majority of the carnival season.  So if you don't get comps or an alternative source of income, you may find this post useful when making your fete decisions... 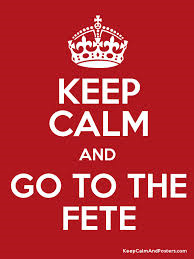 These are my picks for the next couple weeks:
Red
April 4, 2014
$1500 (general) $3000 (vip)*
I'm so over Mas Camp, but if I had to chose one night, it would be Red, which will feature Skinny Fabulous and music by DJ Richie R.A.S. and Nuphoric from Trinidad.  This night will be organized by Island Vibes, the lastest group of Carnival promoters and I have no doubt that they will do an awesome job that night.

Soca vs Dancehall
April 6, 2014
$2500 (early bird) $3000 (presold)
If you were lucky to get the early bird tics for $2500, this is a good deal for a drinks inclusive event.  The selling point for this fete is DJ Private Ryan from Trinidad (yay!).  The theme is Carnival at Night so I am curious if patrons would actually wear costumes.  But the one thing I've learnt is that Jamaican party-goers will stick to a theme.

Canboulay Breakfast Party
April 21
Rodney Hall Estate, Portland
$4000
I predict that these will be the top two events on the Easter weekend, but the choice will depend on what you are looking for in a fete.  Beach Jouvert has its loyal followers, especially those who love the paint experience.  You may have noticed that there are very few live performances this season, so the addition of Bunji and Fay Ann is a big selling point here...

On the other hand, Canboulay is for the pretty people in pretty outfits.  Portland will be a nice venue for a breakfast fete but only if you will be staying there for the entire weekend because going to Portland from Kingston in wee hours of the morning is no easy task. I do feel, however, that the Portland weekend of events will also attract those in the over 30 age group who are finished with the Ochi Weekend and Beach Jouvert.

Dusk
April 21, 2014
Beverly Hills
$2500
I enjoyed this fete a lot in 2013, so hopefully I can attend again this year.  The poolside venue is a nice touch and the music will be provided by Dei Musicale from Trinidad and Richie R.A.S (yay! x 2).  The $2500 drinks inclusive cost is also a plus.  This fete is a good choice for those who will be in Kingston for the holiday weekend and looking for a no-fuss event....

I Love Soca
April 23, 2014
Cost: $2000
Venue: TBA
Kudos to Andrew, Ian, and company for owning the Wednesday before Carnival. I Love Soca has become a staple in the last week of Carnival events.  By this time, everyone is pumped and ready for the weekend. This year it will be more than just a cooler fete with performances by Farmer Nappy and Lil Rick...

Now..it gets sticky on Saturday April 26...A.M.Bush Jouvert ($4500)? or Sunrise Breakfast Party ($6000)? or both? From my biased position as a Trini, I would opt for A.M.Bush because it has a record for being one of the best jouvert fetes in Trinidad (even Jamaicans would admit to this). But then...Sunrise Breakfast was BESS last year, hands down one of the best fetes I've been to in Jamaica. If you have the money then go hard and do both...