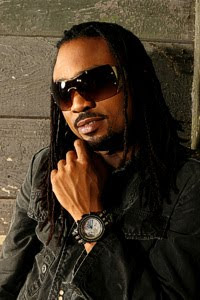 So it's official! Machel submitted his entry for the Soca Monarch! Who knew that the 2 million dollar prize could attract even the great Machel? I remember in the early days of the competition when the "big" artistes would claim that they don't need competition to prove their abilities...and then there were the sour grape artistes who would claim that they were "robbed" and vowed never to enter the competition again but gradually we see them coming back...boy that William Monroe must be reall grinning this year and happy that he doesn't need a CLICO payout...

The strong contenders for Soca Monarch are: Machel Montano, Faye Ann Lyons, Bunji Garlin and Kes (Groovy). Faye Ann has to bring it 100% and bring the whole of Point Fortin to mash up the venue because it's not difficult for Machel to put on a flawless performance but his following may not be as big or wild as the Faye Ann or even Iwer. So Destra wha yuh saying????
Posted by cute dougla at 11:11 AM No comments: 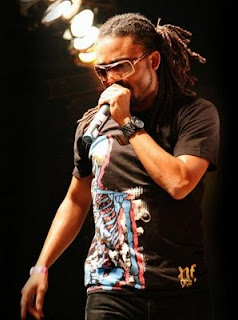 2011 has presented the best soca I've heard in a while. Some of the artistes have returned to the roots of soca and stopped trying so hard to copy dancehall or hip hop; most of these songs are truly soca songs. Listening to Red 96 online everyday is really amping up my excitement for Carnival....Big kudos to big producers/writers like Kernal Roberts and Kerwin Du Bois for bringing back the soca! But my fave this year is definitely Machel....it is safe to say that Machel is back with a bang! Illegal, Advantage, Hard Wuk and Coming Again prove that Machel still has what it takes to be a soca mega star. Following behind Machel is Kes, oh gosh...all yuh know how I feel about this man! But seriously, 2010 really gave Kes an opportunity to perfect his skills and solidify himself as a true soca artiste but I still find he could do without those back up dancers...My ringtone choice is Benjai's Trini; I LOVED this song when I first I heard it. It's a nice groovy song that makes us all proud to be Trinee and it is a sure road march contender; people do forget that a slower song could be good for the road. My guilty pleasure song is Iwer's Come to meh; just because I never liked any of his songs but this Grenadian- produced song is maadd! All I could say is Soca Monarch better watch out. The out-of-Trinidad fave is Lil Rick's Go Down (love my Bajan peeps!) but especially the mix with Machel. I've been loving the original tune since Miami Carnival and went crazy when I heard the Machel remix...woooiiii

But my geatest concern is what's up with the women? For so long the women were holding their own and giving the men some real competition but I feel like the female artistes are somewhat on the periphery this year. Destra has released so many songs but nothing really grabs my attention except Proppa which has a definite Bajan sound to it and is my kind of wining tune. As always Patrice Roberts has a strong groovy contender, Mas and Wining which is one of my top 5 picks for this year; this song is lyrically sound and captivates the feelings that are synonymous with Trini carnival. The comeback female is without a doubt is Ms Saucy Wow herself with Dance and Dingolay who could still perform a song like this and make some big men blush!

There's still some time for some songs to grow on us and for artistes to release new songs. And we know Machel has about 3 more tunes to drop but these are my picks so far:
1. Illegal- Machel Montano
2. Trini- Benjai
3. Advantage- Machel Montano
4. Wotless- Kes the Band
5. Mas and Wining- Patrice Roberts
6. Proppa- Destra
7. Dance and Dingolay- Denise Belfon
8. Come to meh- Iwer George
9. Go Dung- Lil Rick feat. Machel
10. Hard Wuk- Machel Montano
Posted by cute dougla at 9:09 AM No comments:

Believe it or not I've never taken part in J'ouvert! I know that it's strange being the Carnival lover that I am, but growing up, my parents never supported the idea because they felt that it was too rough and dangerous for me. And even with the proliferation of inclusive J'ouvert bands that offer security, it still never appealed to me. I love Carnival with every cell in my body but I lack the necessary endurance. There's no way that I can do J'ouvert and then play mas on Monday. What about the paint? How am I going to do makeup on Monday? and most importantly I will just be way too tired. Getting adequate sleep on Carnival Sunday is very important for your stamina on Monday and Tuesday.

This is why I am endorsing Caesar's Army J'ouvert on SATURDAY March 5; not on Sunday morning. It is a very cool idea to have J'ouvert on Saturday even though it contradicts the traditional idea of "the opening" of carnival. They'll just be "opening" a little earlier to accommodate those who really don't like the rush between J'ouvert and Carnival Monday. I am confident that the event will be a success since they have a dedicated following and they have produced many successful events. The theme is also appealing and goes well with the J'ouvert concept. So if you are looking for an a well organized J'ouvert experience with much vibes or just an alternate event, be sure to check it out.
Posted by cute dougla at 11:01 AM No comments: 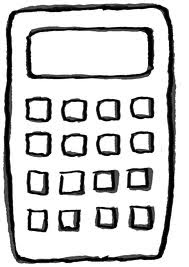 It may be no surprise that Carnival costs a lot of money especially when you don't live in Trinidad. It can also cost even more when you want to go extra fab which can inlcude purchasing a FL costume, makeup, boots etc. In addition, the fetes you select can add $ to your budget. But it helps when you make do with what you have from previous Carnivals or in your closet. For instance, I'm using my bag from last year and wearing something I have already on Carnival Monday. I have a designated Monday boots that have matched all my costumes in the last 2 years, including my costume for JA carnival so that will be worn this Carnival Monday. My toe protectors are still good from last JA carnival and can be used again. This is where I am so far in my budget: 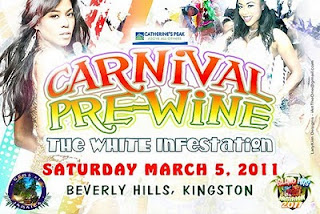 Now on to other Jamaica carnival news...Soca Republic will be launching their costume for Bacchanal carnival as wellas their UWI J'ouvert presentation on January 21 at Ashli's Bistro in New Kingston. Gems Jamaica and Island Mas Jamaica will also be hosting another early carnival fete on March 5th. I hope that they would try to give us something different outside of Bacchanal....Move with the times and bring Jamaica in the now of soca music...
Posted by cute dougla at 10:39 AM 1 comment: 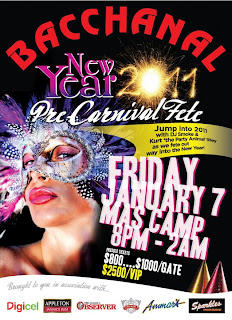 The offical start of the Jamaica Bacchanal season is scheduled for this Friday with their pre carnival fete. I'm glad that they are getting and early start on the partying and now there is no excuse for the DJs to play vintage soca; there's enough time to get people into the latest songs. And if these DJs ever heard of a little webiste called YouTube, they can find all the 2011 songs there. But why does VIP cost JA$2500; for a raised private area? Come on...


So what do I expect from Bacchanal this year:

DJs should play 2011 songs; not 1 or 2 but play all of the songs; don't make people feel that they have to go to T&T to hear the latest tunes...

More live performers; there are other performers besides Destra....

Can you please update your costume designs? I want different color schemes, backpacks and no more plume feathers and those cheap overdone beads and sequins...

I am so over this "secret" registration for Frenchmen costumes or claiming that it's open when it's not...just be straight with people...

That's just my opinion. As I said in my post carnival post, Bacchanal needs to realize that their model has to be revisted; their late 1990s/early 2000 take on Carnival needs to be updated....
Posted by cute dougla at 10:19 AM 1 comment: