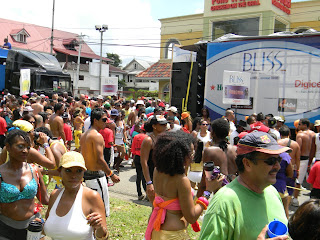 After the set ah lemons ah get from Bliss ah decided to make some margaritas on Carnival Monday.

I was able to remove the decorations from the complimentary bra and glue it to a white vest which I wore with white shorts and my customized headband. After getting my make up done at Makeda from Shades of Sugar, I was feeling bess and ready to enjoy the day.

We met the band after the stage at the savannah around lunch time and headed to the lunch stop in St James. I loved the idea of the blankets and setting under a tent. While I secured our spot under the tent, the bf opted for the Popeye's lunch for both us...it was warm and not oily so it wasn't too bad. I also had a nice cold green sands (I love green sands!) and chilled with some friends. I made sure to use the toilet which was clean and I was able to wash my hands with soap; they also had mouthwash, deodorant spray and panadol.

After about an hour and a half, we were on our way to St James to come down Mucurapo Rd and then onto Tragarete Rd. I had the best time on this part of the route. The music was sweet with a wide selection of songs being played by Private Ryan (my fave soca DJ by the way). And of course the Johnny and coconut water was flowing. Monday ultimately ended at around 5:30pm which I had no problem with since I like to get home early to rest for Tuesday...

I heard lots of people complain that there was no vibe and the band was boring. I guess some people missed the Tribe hype and crowd which was I was hoping not to encounter. After leaving Bliss, I met up Yuma on Arapita Avenue and noticed the unformity that their Monday wear brought to the band. I know that Bliss said from the beginning that they will not offer Monday wear because they probably wanted masqueraders to wear part of their costume as is customary. All this would be great if the costume could hold up for 2 days! I am sorry but I cannot pay to have another Monday costume made nor am I artistic enough to make my own so my only complaint would be that some form of Monday wear should have been offered.

Basically once the music was good, I got what I wanted to drink and the security was on point...Monday with Bliss was bess...
Posted by cute dougla at 3:52 PM