This was officially my 10th Beach J'ouvert and I really thought it would be epic; instead, I was left disappointed and sober. It could be that I had already made up my mind that any show with Shur-lame Winchester as the headline act for Ja$4500 would be a yawn fest and a rip off. I knew that Shurwayne would have been bad but I didn't know he would have been that horrible. His performance was lackluster and messy. And to make it worse, who was that guy in the yellow jeggings walking up and down the stage with an ipad? In addition to sunshine pants, the dancers were weak, and the band was out of of synch a lot of the times.  Shurwayne needs to get a stage director or choreographer along with a musical director to tighten up his act. Don't get me wrong; Shurwayne has one of the best voices in soca especially for groovy, but he was a much better performer when he was with Traffik. You may have noticed that since he left Traffik in 2008, his popularity has declined even with good songs. In some cases, it may be better for an artiste to stay with an established and experienced band than venture on their own. I mean not everyone can be a Machel or Kees.... 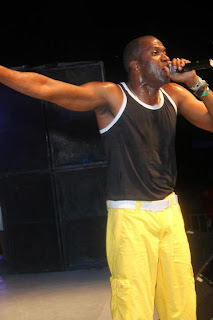 But what baffles me even more is why would Bacchanal Jamaica hire Shurwayne as their headline act? Clearly the organizers are out of touch with what's happening in the soca  world because Shurwayne and You would be close to the bottom of the soca band hierarchy. The most obvious reason to me is that his price was right. I also heard that they wanted Machel but he had not been sentenced yet so they weren't sure if he would have been available, so in addition to Shurwayne, they took the HD what left-Patrice and Nappy...

I'm not sure what arrangement Bacchanal Jamaica had with James Bond beach but parking spaces were limited. Unlike last year, parking was not accommodated on the open field. Rather, it was on the entrance road and on the main road which were insufficient.  The police officers then instructed us to park at the police station and take the shuttle to the venue. This would have been great if we knew where this police station was.  Eventually we had to squeeze into a small lot where everyone had to block each other for the going rate of ja$500.

Once we got inside, I wanted to start my drinking. For the whopping ja$4500 entrance cost, the drinks were generic and below the shelf.  The best option at that point was Smirnoff, if you drank that.  I'm not sure what was served in the VIP, but I suspect it wasn't much better. And while we are on VIP, what a waste of money. There was no need for a VIP at Beach J'ouvert, but I guess Bacchanal just needed to squeeze out every dollar they can from patrons.

I'm just going to say that Bambino can't play soca to save his life. He claimed that he went to Trinidad Carnival, but did he go to a fete, bar or listen to the radio, walk down the street or something? Bambino is the worse soca dj in Jamaica. He speaks too much and his soca playlist consists of 7 songs. Dj Smoke played a little better, but overall the dj music lacked variety and was poorly mixed.

If you've been reading this blog for a while, you would know that I usually have nothing but praises for Beach J'ouvert which was one of my fave events not just in Jamaica, but generally. I've fallen out of love with this fete which has gotten more expensive and weak in quality. Unless Machel is at the next Beach J'ouvert,  I am almost sure that I won't be there next year...

I came back to Kingston on Easter Monday and almost did not attend Dusk.  But I had liked the idea of a poolside bottle party and wanted to check it out.  Dusk is a new fete for the Jamaican Carnival season and will definitely be on my list next year.
It was cool that we could have walked with our own expensive liquor and not give it to the bar.  The only complaint here was that it was difficult to get sufficient ice and chasers when you held on to your own alcohol.  But eventually we convinced the bartender that his night would have been much easier if he just gave us give us bottles of ginger ale and cranberry juice instead of those tiny cups.

The other attraction to the fete was the the doubles. Now if you know a real Trinbagonian, you are aware that doubles are our sustenance, and if you are a Trinbagonian in Jamaica, doubles is like gold. So with my yellow belly in hand, the first thing I did was seek out my curried gold. It was so funny that the first Trini I saw pointed me in the direction of the doubles. I was surprised that this wasn't the Mrs Khan doubles, but one made by a Jamaican. I must give her props for presentation and trying to keep it legit by offering pepper, cucumber chutney, and shadow/chandon beni sauce. But sadly, it ended there. Even Trinis know that making doubles is no easy task, so i rate this chick for effort but hands down it was the worse attempt at doubles i have ever tasted. I mean a doubles is really bad when the pepper cannot even mask the taste. Even though she got the texture right, the barra was bland.  One of the biggest mistakes people make with doubles channa (chick peas) is that they curry it the same way they would do it for roti; no, it is not the same and it‘s worse when you use the wrong curry. Any way, let me stop because this post is about the fete and not the doubles...

The best part of Dusk for me was the music which was provided by Dei Musicale from T&T and Richie Ras from Jamaica. The playlist was current and extensive. Trust me, this was no Mas Camp vibe and i don't even remember if Palance was played.  The congo line around the pool was also a major highlight and showed how nice the vibe was.

The Dusk promoters are definitely on to something here. The bottle party concept, intimacy, good music and a fuss free event made this one of my favorite fetes of the Jamaica carnival season. It was also a great way to end the weekend and help me forget about that mess that was Beach J'ouvert....
Posted by cute dougla at 9:09 PM