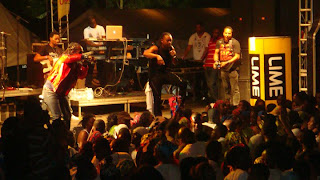 Attending the Lime All Island J'ouvert on Friday was kind of iffy since this was their first event I've attended but once Machel was going to be there...I dey! It's a good thing I got there really late because the party was LAME, the music and selector were LAME and worst of all there was the false advertsing of free drinks in VIP. Not even the bar man knew that the drinks weren't free. The explanation given was that it was a Smirnoff sponsored event so only Smirnoff and Red Bull were free...wth! But it's a good thing I'm a vodka drinker so it wasn't a big deal but why would you only have 2 bartenders especially when they were obviously on a go slow. The other fail in VIP was that there were no restrooms. You had to walk all the way to the back of the venue to access the 6 toilets provided for the entire party.

But the VIP was on a platform with good viewing access to the stage; we also had seats and tables and jerk from Scotchie's. A little after 2am, Machel came on with the band and his dancers....he reall mash up the place with all his hits from this year and earlier...The crowd got into a frenzy when he did Big Truck, Footsteps and Mad Bull. Big up to girls like Brithany Dookie and her bend over skills; but an even bigger kudos to the chick from the crowd who proved that she could match Brithany's skills. The most improved award should go to Patrice Roberts...my girl, why were you holding back all these years? And what a slamming body! Zan and Nappy did performed their usual songs giving the set variety. Overall, Machel saved this party but I wouldn't expect any less because he's the biggest soca artiste in the world!
The next night we were off to Bazodee. After last year's disappointment, I didn't expect much but I was happy that Frenchmen masqueraders got the tickets for $5500 instead of the regular $6000. We got there around 10:00pm and there was the typical crowd. By now, I could identify the usual Frenchmen suspects (I guess they could say the same about me). Alicia the Duchess from Trini delivered all the hit soca songs sharing the spotlight with DJ Smoke- the music was bess.
I got my Trini food first- doubles, bake and saltfish and roti and later on I had the barbeque pigtail (it sell off). This year the Johnnie was flowing which didn't end up being a good thing for me. However the dessert station had been significantly cut down and Haagen Daz was absent...no scene because the Johnnie was flowing.
We eventually moved to dance floor which had mucho vibes. I was surprised that Machel came on for an impromtu performance but then bradap! no Machel! Apparently he fell off the stage allegedly being shocked by one of the generators....???
The only downside of the night was the power cut and Machel's short performance. We eventually left the fete around 2:30am although I had planned to leave at 1/1:30am. The only thing I would regret was not counting my drinks cause did I feel it a couple hours later....
Posted by cute dougla at 5:02 PM