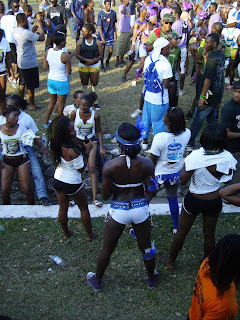 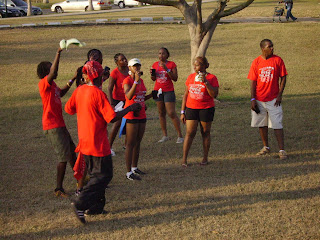 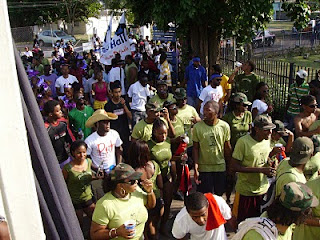 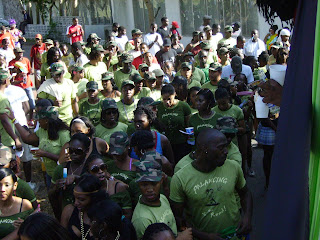 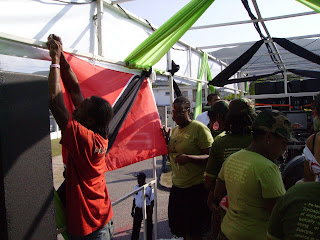 I think that UWI Mona's Campus Carnival 2010 was one of the best I've experienced so far. The Trinbagonians on campus ensured that they would leave their mark on the ring road this year. They palanced and wined until the music was turned off.

Today, many students are not aware that this was one of the first carnival events in Jamaica and was pioneered by the Eastern Caribbean and Trinbagonian students. The Carnival then became the responsibility if the Student's Guild and was led by the various residential halls. Three years ago, I was fortunate to be a part of the Trinidad and Tobago Students Association who wanted to bring the island feel back to the event; of course this was met with resistance since campus carnival is a "hall thing". We still pursued and we have now made our third presence on the ring road. The TTSA band has been a tshirt band since its inception simply because it's cheaper and easier to coordinate, and we do those tshirts so well!
So big up all the Trinbagonians, Jamaicans, Bajans, Bahamians, Belizeans, Vincys, Caymanians and everyone else who made Saturday a great success for the Palancing on de Road Tshirt band. And we know that half the band was drunk cause the drinks were flowing...too many people were drinking "anything"! For one day, we didn't care about the Air Jamaica deal, flying fish, who preventing patties from coming in; who selling too much Trini products in their grocery etc...it was just pure Palance....so look out for us next year for sure!
Posted by cute dougla at 8:20 PM