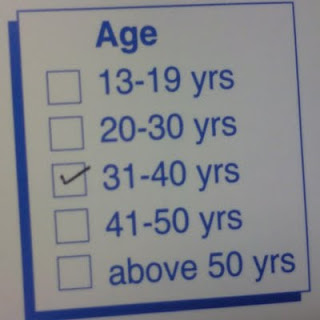 Being 31 always seemed soooo old and as a teenager I never thought I would be this old!

I know a lot of women lie about their age simply because we've been taught to fear aging and the physical changes that accompany it. I am really fine with being 31 even though I wished I had my Phd and never gained so much weight ...sigh. But I've achieved a lot academically and professionally. I also have great family support, the coolest friends and an amazing life partner. I don't rent but pay a mortgage and my car starts each morning. I also don't have any major health problems; nor do any of my family members. I could go on about all the blessings that I have been granted but the point is that not having a Phd and dealing with an embarrassing muffin top are not so bad because there are so many positive things happening that I don't have any excuse to be unhappy.

This quote from the Dalai Lama will be my motto for the year of 31- "Happiness is not something ready made. It comes from your own actions". I hope you create your own happiness as well....
Posted by cute dougla at 8:04 PM No comments:

The Heroes will Fall... 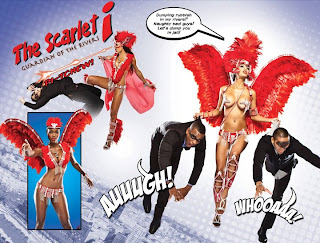 All yuh see that Island People mess??? At first I attributed the disaster to my stream and may be I had to be there in person to adequately assess these costumes. But then I saw the comments on FB. I don't think I have ever seen persons rip apart a carnival band with such passion.

Island People has always presented a more creative spin to the beads and bikini genre even though their service may not be the best. But something went very worng with their interpretation of Heroes last weekend. For the majority of costumes the colour combination was wrong, the spandex leggings were questionable and those capes were a hell no.

But all was not bad. I did like Scarlet (the red) and Oya (white) and Wildheart (brown and yellow) was okay. You could see the pics on their FB page.

What makes this even more interesting is that Island People is willing to go back to the drawing board and make some adjustments. They have even asked persons to provide feedback on their FB page. I don't know if a carnival band has ever done this before but I find it pretty cool. Even though I know that most of the people who comment have never played or intend to play with Island People, the critiques are basically the same.

I don't think Island People masqueraders should be so quick to abandon ship; give the designers a chance. You already know what the road experience is like. I've never heard of committee registration, pre registration of loyalty card in IP so don't fight to be in bands that have these requirements... 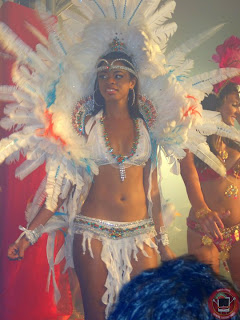 So the band registration drama has begun. I've been monitoring the FB discourse and ppl are getting their feathers in a bunch when they heard that some bands are pre registering the fortunate msqueraders. Other persons fear that there will be some kind of end of the world if they don't get into certain bands. I wish them the best of luck!

I really don't see the big deal with pre registration. I mean if you know a committee member of a band of your choice, you will find yourself taking advantage of that connection...right? I know I will! But I do believe that each committee member or section should be a allowed a set number of pre registered masqueraders. And that number should not be so large that the majority of potential masqueraders are unable to register using traditional methods. But my position on this is that we as the paying customer should not allow these bands to feel that we would give an arm, leg and a couple of vital organs to get the privelege to purchase a costume. I've said so many times that there are too many bands to choose from, and we should stop acting the fool as if Tribe is the only band for T&T Carnival.

I agree that Tribe offers a lovely product and great service. I have experienced this service when I played in Tribe in 2008. However there are other bands that do the same. I was very happy with Spice and I've heard great reviews for Ronnie and Caro and newbie Oasis. But this change has to be collective. Most of us would not play in a band if our friends are not there. The thing about Tribe is that you must see at least 15 people that you know which is always fun. We also place a social value on bands like Tribe/Bliss, Spice, Harts and IP. These bands attract a certain class/colour as well as class/colour aspirants which make them bands of choice for many people who do not recogize bands that do not offer these social benefits.

I am in no way condemning persons who make these choices; I have played in these socially privileged bands so I cannot chastise anyone for doing so. But let's stop pretending that mas is all embracing and equal....

Posted by cute dougla at 6:29 PM No comments:

Who Wants to be an Angel? 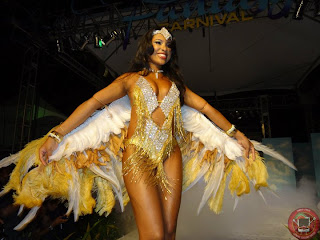 This has been a really slow summer for me so there hasn't been much to blog about. I've been trying to finish up my MPhil thesis to submit which brought on a whole heap of UWI drama which is not worth blogging about. I'll just say that I need to get this degree so I can move on with my life.

I was also pretty bored with the band launches until I saw Fantasy Carnival's 2012 presentation, Book of Angels. Well you know I love new bands. I have absolutely no band loyalty and as an independent masquerader, I am always willing to try a new band so they had my attention.
Fantasy has always been on the Jouvert scene and the same committee does the Jamboree fetes so they may not be completely daft to band management. As usual I am interesed in their FL prices and corset options in order to make a decision. The costumes have already captured my attention- wings galore! The costumes are well designed and capture the epitomy of pretty mas. But would we expect anything less from designers, Richard and Anthony who gave Spice and YUMA an impressive entrance into the band scene.
I know I have said that I am hesitant to play mas next year since I'm tired of the drama. But Fantasy is making this decision very difficult to adhere to. IF I am playing. and that is a big IF, I would like a FL costume with wings, a small headpiece; easy registration for the costume I love (which is Power), a corset option, accessories that don't rip my stockings, a reasonable price, a small band and just a drama-free experience.

***the pic of the Power costume came from Trinidad and Tobago Carnival Costume Photos
Posted by cute dougla at 7:40 PM No comments: