Tribe's "The Way of the Warrior" 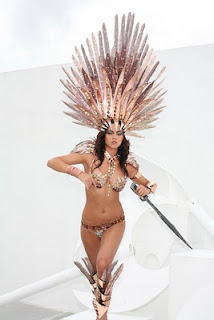 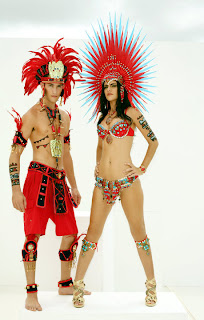 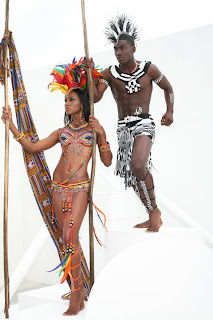 Some people may know that I'm not a big Tribe supporter; don't get me wrong I've played mas with them before and it's the best service I've ever experienced as a masquerader. However, what really turned me off was the frenzy to get into the band. I'm not going to rush and fight to get into any band but kudos to the Tribe die hards who will do what it takes (and I mean anything!)to get into this band.
But I have to say that their presentation this year caught my attention...I am glad that some of their costumes even though still within the bikini/beads/feathers genre, do not look like something we've seen before. However, it will definitely be a Frontline or Buss situation because the Frontlines sell off! Also, the males have been finally recognized and there has been a significant improvement in the offerings to our guys; they even have Frontline/Individual options!
My top 3 faves are:
Xi'an Warrior (Sandra Hordatt)- I love love that there are no gems and feathers and it looks so Xena-like.
Iroquois (Rhiannon Pemberton)- The color scheme is wicked and that cage bra is so sexy!
Masai Tribal Warriors (Peter Elias)- I like Peter's use of the Kinte cloth and the color scheme for the males...it's so warrior-ish.
Like always, Tribe's costumes are sexy and skimpy and there would be a serious problem if I wore any of these costumes...but I do hope that there are some sexy cover up options for the sistas who have muffin tops. Most importantly, it's one thing to like the costumes and to hold a desire to play in the band...but how do plan to get into the band???
***pics came from mimi's blog, where you can also see the entire presentation.
Posted by cute dougla at 10:12 AM