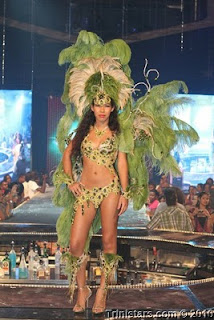 I was very disappointed that I was unable to view a live stream of Spice's launch on Sunday since triniscene opted to stream Yuma's launch which was held on the same night. After viewing the pics on trinidadcarnivaldiary, I wish I did go to the launch to view these costumes first hand because I felt deceived. I am trying to convince myself that I need to see the costumes in person because it probably looks way better than what I'm seeing. Honestly I'm not sure what went wrong with these designs and I am very disappointed since I've been singing Spice's praises since its inception.

After such a great presentation by Tribe, I expected more from Spice; also, their theme Signature Collection has so much room to be creative that their costumes did not need to look recycled. The colors are not mind grabbing or original and most of the designs look almost the same from 2010's Spice Route. I know that Anya loves the bling factor but some of these gems are grapefruit size that looks more gawdy than sexy. It is always a bad sign when you see the models holding up the headpieces at a launch which means that you will be doing the same on Carnival Tuesday. As for the male costumes....come on Spice...please...I am really tired of these bands who believe that guys are only concerned with drinks and the girls...which is no excuse to give them crap to wear!

If I had to chose, my faves are:
Spice also needs to take into consideration the criticisms they received for poor customer service, long waits for costumes; poor replication of costumes and the disorganized lunch stop. I believe that these problems would deter those masqueraders who decided to give Spice a chance this year.

I'm still not sure if I will be with Spice next year but all depends on the costing of the costumes and the availability of corsets because I need to hold down my muffin top.....