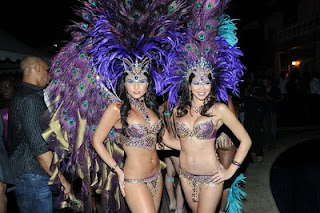 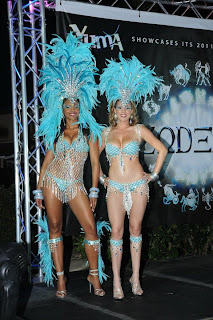 Things are heating up for Carnival 2011; another new band has emerged with their spin on the bikini/beads/feathers genre. Yuma (Young, Upwardly, Mobile, Adults) is a new band on the scene, with a design team that includes, Crystal Aming Marcus, Richard Dookhdeen, Anthony Hall, Lee Aleong and Gina Maingot. My favourite costumes in the past were from Crystal and Richard and Anthony so I'm not surprised that Yuma's costumes are FAB. Two of their thirteen costumes from their presentation Zodeak were released at their media launch: the Oracle and Aquarius. There are lots of feathers, bling and I'm feeling the sparkly knit dress thingy on the Aquarius costume. Now people don't get chain up; not all of us including myself will look like these models if we decide to wear such a costume so will there be variations or some cover up options? And my verdict is still out on that "upwardly mobile" slogan cuz if that is referring to the finances, Bruce and the Government of Jamaica has ensured that my wallet not upwardly going a damn place. I really believe that masqueraders will be getting a lot of options for 2011 so don't feel the need to bribe, steal, brown nose, or line up like you going for a visa to get into Tribe. As for me, costume pricing will be the deciding factor next year......


*photos taken from the Yuma FB page
Posted by cute dougla at 4:02 PM