Carnival this Weekend in Jamaica! 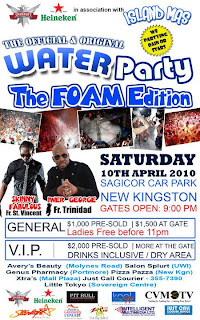 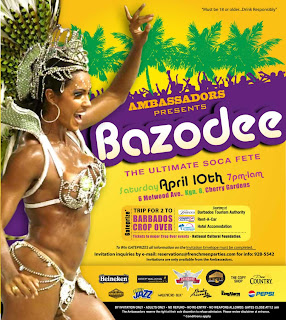 So folks the weekend is finally here with lots of events to choose from to get your Carnival fix. I heard that the Frenchmen's Blocko (not to be confused with the Bacchanal Jamaica Blocko) that was held last night was a success. The party had a good vibe and it was well worth the JA$2000. Later tonight, Shurwayne Winchester and Y.O.U. along with Imij and Company will be at The Bacchanal J'ouvert at mas camp. The paint will be distributed at mas camp before they go on the road in New Kingston. Some persons are opting to meet the band on the road without going to the show which is fun too. Bacchanal will also be providing water trucks for people to wash off the paint before they get home because of the water restrictions. I know that paint is necessary for J'ouvert but unlike the paint used in Trinidad, this paint is very difficult to wash off because I think it's not mixed properly. Considering the critical water situation, using valuable water to wash off J'ouvert paint seems selfish. Most importantly, I urge everyone to be careful on the road...there's usually very little security and it becomes a free for all kind of thing.
Apparently Joker's Wild J'ouvert has been cancelled and I don't why the people acting as if it was never on. It's a good thing I saw the flyer with my own eyes. But I am not surprised: how did they expect people to pay all that money to see no one perform?? Best of luck next year!
Tomorrow Island Mas will be hosting their WATA party, another sore issue with me. Firstly, there should be no water parties during this period even though they will be getting the water trucked from outside of Kingston. Guess what...it's still water being wasted...I don't care if the water coming from the moon...the fact is that there are people who have not received water since December and that water can be used by someone who actually needs it for their survival. In a later press release, Island mas claimed that they will abandon the water truck idea and it will now be a foam party because this needs less water....it's still a waste of water!
You can also do Bazodee on Saturday which is all inclusive and expensive but if you can afford it...I fully endorse this fete. They are even offering a Trip for 2 to Crop Over as the gate prize (keeping fingers crossed!). I collected by reserved tickets yesterday at the Pure Country Building on Deanery Rd. so I'm not sure how people will get tickets tomorrow. Will let you know how this one goes...
The road march is on Sunday from about 10am to 4:30pm but if you didn't get a costume, you can check out the Socamaloo Soca Road March Watch Party (the name real long boy). It will be held at the Keycard Beach Village on Trafalgar Rd. from 10am until 10pm complete with the whole beach vibes which include sand and Hellshire fish and lobster on sale. I get the feeling that this fete will attract a lot of persons because of its location.

Just a follow up to the last post: I still didn't get my complimentary bottle of Pure Country Orange Juice! Doh worry, there's still tomorrow!
Posted by cute dougla at 5:42 PM