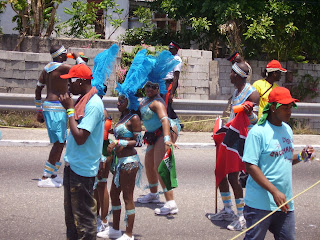 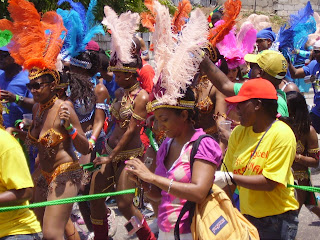 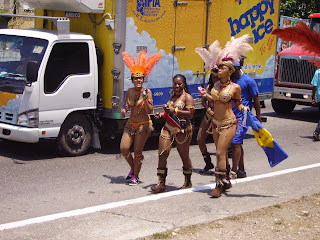 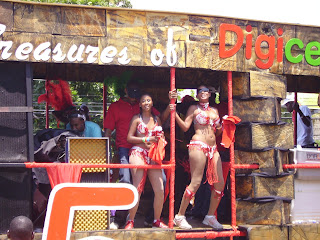 I was very happy that I did not to meet the band on time at 10am on Sunday because by 11:30, the band was no where to seen on Wellington Drive. I then decided to meet the band at that point and waited for almost 30 minutes until they got there. Once we got with the band, the vibes were nice and the music was good. Again, big up to Private Ryan, a real soca DJ as well as DJ Smoke from Renaissance. The band looked great even though I didn't really get to see the costumes in their sections. There's really a difference when you see the prototype costume and when you see it on the road in the daylight with masqueraders in their glam makeup and accessories. There were a couple of individual costumes, not sure how legit these were since they didn't really go with the theme...some did look good though. On another note, why are some men still wearing cycle shorts with their costume? Hello...not even Colin Lucas wearing cycle shorts anymore! The male costume comes with the board shorts so that means you have to make a special request for the cycle shorts....which is more disturbing.
So everything went well, we palanced down the road.. in the hot hot sun...people, drought sun is the worst sun. And you know if the sun hot, you get thirsty...these people only distributing tiny bags of water and the bar did not give a bottle of water but poured it into a 6 oz cup so I real vex I left my cup at home (I'm one of those people who want to "save" their complimentary cup to carry to work). I suspect the water situation had something to do with the sponsors.

About 1:30, we got to the lunch stop on Lady Musgrave Rd. and this is where the mess happened. Because I was in Frenchmen, I went to our designated 2 tents...if you see push for lunch and you know your girl not in that wildness so I waited a little for the hungry people to get their food first...I don't now why these people couldn't just form a line. So I opted for Chinese roast chicken and then made my way for a drink. There were mimosas, wine spritzers and fruit juice. I had a couple of mimosas and asked for an orange juice. Now I don't know if I blight with Pure Country orange juice but I was told that I couldn't get the juice in a bottle, only in a small cup....I real like my juice and I was really thirsty too so a little cup of juice would have done nothing...so I take the lil cup and humble myself...I should have brought my own damn cup! Frenchmen masqueraders could also choose from fruit plates, hot dogs, jerk chicken and rolls. There were a lot of chairs, sinks and portable toilets in their lunch section.
I went back to meet the hubby and lo and behold, he had not moved in the line for the Kashmir, Kahlahari and Diamonds masquerders. I realised that the food was now being boxed by only three persons whereas everyone else's food was already in boxes. People got very agitated and a fight broke out; it got even worse when they sent the sanitation workers to collect their food at the same tent. (Imagine the sanitation workers had their own section: Binny..). The masqueraders were in that line so long that I saw a girl pass out right there...they couldn't even get water to her because there were no drinks inside the lunch stop. Eventually he got his lunch and we ate...the food was horrible...I regretted not having the hot dog and fruits instead of the uncooked rice and cabbage but the chicken was edible. I went to the Frenchmen bathrooms which were extremely clean with toilet paper and went back on the road. The lunch stop was poorly organized; it seems as if you are not in Frenchmen or Bacchanal babes (BB had an two tents for themselves while 6 sections battled it out under two tents), you had to put up with poor organization amd horrible service; at the end of the day, everyone was a paying customer. I am really tired of this segregation in the mas, with some people getting preferred treatment over others, and we know that a whole heap of people in the stoosh sections, get their costume free.
The palance from Lady Musgrave was fun...the sun was gone, I had plenty protein in my system and I had 2 bags of water. I was still with the Private Ryan truck and even saw some of my good friends along the way. We got to the beach village and didn't see much people there (somebody please tell me how that went). The whole Waterloo Rd stretch was the best! The rain came and we well palance in that rain. I put my phone and camera in a zip lock bag and I real enjoy myself. By the time, we got to Half Way Tree, it was clear that the rain wasn't easing up and you know Half Way Tree real nasty and I was walking through some black water up to my knee which grossed me out. Also, most of the security guards had disappeared by that point. Now I not in the business of getting ring worm and rash and those kind of things so I jumped in mummy in law's car and went home about 5:15pm.
Although, I didn't go the entire route, I enjoyed myself to the max. The costume held up well and the toe protectors were okay in the boots. I had a previous cut on one of my toes so I'm not sure how effective the toe protector was on that toe. Also the boots were drenched in water, so that also hindered their use but I will try them again next time. Surprisingly, the music was better than expected (Private Ryan to the world!), and the rain came at a good time.
There's a complacency when a band does not have competition; they know that there are no alternative bands so they take on a "take it or leave it" attitude. The customer service at mas camp is horrible and their organization skills are ineffective...we are no longer in the 1990s so step it up and get with the times with your music, costume purchase and distribution and quality and design of costumes. Give us back packs, collars and tails. PLEASE explore new colour combinations and give the men something better to wear....
Posted by cute dougla at 6:43 PM