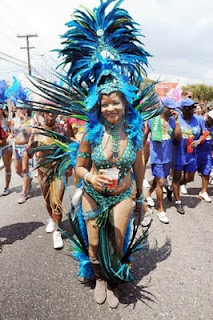 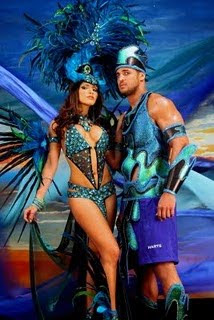 There was this one masquerader last Sunday whose individual costume caught my attention. It did not match any of the other costumes and it just seemed really familiar. I decided to send a pic of the costume to Saucy, the carnival costume guru and the creator of http://www.trinidadcarnivaldiary.com/ and I asked her if she knew this costume. Lo and behold, she confirmed my suspicion that this costume Life in the Waters/Earth Crisis came from the Trinidadian Carnival band,Harts 2010 presentation "50". I have no problem with people using their Trinidad Carnival costume in Bacchanal carnival because you paid a lot of money for it and it looks better than the Bacchanal costume. And in this masquerader's case, she stood out and got lots of attention from photographers. I saw her in both newspapers and tagged in a lot of FB pics. She also seemed to a part of the "Bacchanal VIP" so I guess it was no big deal for her to wear her Harts costume. But again I wonder if all is equal in Bacchanal because there's a clear policy which states that, "Only costumes purchased from Bacchanal are permitted- you will be asked to leave the band and your armbands removed if found in any other costume". Now I wonder if I came in my Thailand costume from Spice if they would have thrown me out?
Pic of the Harts Costume: http://www.trinidadcarnivaldiary.com/
Pic of the Masquerader: Jamaica Star Newspaper
Posted by cute dougla at 7:25 PM