Shurwayne at Mas Camp and Where were the Bajans??? 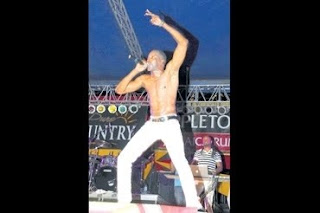 I know that I said I wouldn't go but I was somewhat bored on Friday night and linked up with some friends at mas camp. We got there in time to get drinks at the bar and position ourselves for the show. I must say that Pure Country did a great job as the sponsor that night. They had so many sample drinks that you didn't need to purchase any and if you did, you got a complimentary juice...niceness.

So this is how Simone Morgan from the Jamaica Observer felt about Shurwayne Winchester's performance at mas camp on Friday night: "Camp trembled with excitement on Friday night as the soca prince T&T's Shurwayne Winchester and his band Y.O.U. ignited a bacchanal flame that blazed for the duration of his hour and a half-long performance. Filled with energy, sparks and melodious lyrics the Trinidad and Tobago artiste had the revellers at Mas Camp easily under his command as he delivered a string of hits including Murda, Dont Stop, Tempo, Cant Wait, Party Hard, Wutlis, Wine to the Side, Wine on a Town Ting and Paparazzi...."

Again, I'm not sure about Ms. Morgan's review but this performance was boring at its best. This is the first time that I've seen Shurwayne perform with his band, Y.O.U. after he left Traffik. I always say that not all persons are well equipped to leave their band and Shurwayne is one of them. It was difficult for him to carry some of the songs on his own such as Wine to the side, Town ting, Wotless and Palance....the vibe just wasn't there and his voice didn't hold up to complete the verses. But he did do well with his own compositions- Don't stop, De Band Coming and Dead or Alive which went well with the crowd. He also got the crowd to respond to his water throwing demands which I think is just dumb. I hate to see people waste good water especially since this time last year, we were experiencing a severe shortage of water, and it's just plain inconsiderate to throw a drink on other patrons. But the people love this so give them what they want. And of course the crowd loved the island identification session- "Anybody from..."; let's just say that the Bajans were either pretty quiet that night or just stayed at home....

After the show, Kurt Riley attempted to play some tunes to end the night. What's wrong with Kurt Riley? It was such an amateur session...1 song-stop-talk-play same song-stop-talk some more-play same song- stop- talk louder- talk-same song. So he played 2 songs within half of an hour. And people argue with me that he's the best soca DJ in Jamaica...whatever....

So this Friday, Iwer George will be there so I'm definitely sitting that one out..and preparing for my boy Kees <3

*** the pic came from the Observer since my photographer fire the wuk...so I'm looking for a new photographer :)
Posted by cute dougla at 12:38 PM