Soca and the Spiritual

I really have been wanting to comment on the Machel-Blue tie for the Soca Monarch but I feel that enough has been said and the real winner will always be and always have been William Monro.  Talk done. 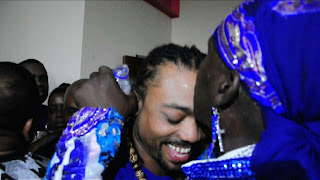 I must admit that it was a while before  Machel's Float  grew on me but I'm upset that it took me so long to get on board.  At the time I was caught up with Superblue's Fantastic Friday which seemed early in the game a clear winner, but I really love both songs. It was only on further examination I came to the conclusion that like many other tunes, they connect us spiritually.  I've said this before about Bunji's Differentology, but these songs focus more on physical and emotional movement.

Spirituality is often linked to the "the sacred" meaning that it is "set apart from the ordinary".  In this sense, these songs "take us closer to a larger reality" or connect us with a "divine realm".  But this is not new.  Superblue has been bringing this experience to his songs since Get Something and Wave in 1991 which called for us to lift our hands to the skies.  For many, the heavens, spirits and ancestors are all located above us and exist outside of our reality. The wave that Blue, a spiritual Baptist and self proclaimed high priest of soca, demanded, encouraged us to reach to this divine place.  It didn't end there as the jump that accompanied the wave became an essential movement that took us off the earth and temporarily into the air.  The dance movements for the Shadow, the Iwer, Ronnie McIntosh's Ent, footsteps, jumbie and palance took the individual into the air, closer to the skies.  This movement is also common among the African Masai warrior tribe which is known for their jumping dance and shows the "strength and stamina" of the males from the village. Similarly, the constant jumping that we so expertly demonstrate at fetes, night after night does require exceptional endurance.

In Machel's Float, he speaks about levitating, hovering, drinking helium- all actions to come off the ground, to connect with the sacred above. This sentiment was also present in Higher than High and Jumbie.   For a true fan of soca, it's more than just simply liking a song, but attaining an emotional connection that takes away from the customary. The job of the artiste is then to take the listener to this level.  Like Super Blue says: for every soca that was written to inform, educate, entertain and feel .  When you can really feel a soca tune, it is no longer tangible, it is no longer ordinary, it's a sacred form....
Posted by cute dougla at 7:10 PM