Carnival Monday 2013 will be one of my most memorable as it has been a while since I was so satisfied with a Monday experience.

I know that I swore up and down that I would never play with K2K ever again, but guess what, I changed my mind and I'm glad that I did. I was so wrong about K2K and I'm proud to admit it. The important lesson for me was learning that I stress too much and what a stress free carnival Monday it was.

Anywho, after getting my makeup done quite early by Makeda from Shades of Sugar, I was ready to meet the band on Ariapita Ave.  I was glad that K2K chose to start here and end at the QPS.  It just made sense because we never got caught up in band traffic.

Kudos to K2K for bringing mas back to Monday.  I really don't like this trend of individual Monday wear with masqueraders in the same band wearing their own outfit.  It just seems like an ole mas band because there's no consistency.  And even better, K2K didn't give us a tshirt or hot shorts, but a well tailored blazer to be worn with our own black shorts, bikini bottom or leggings. 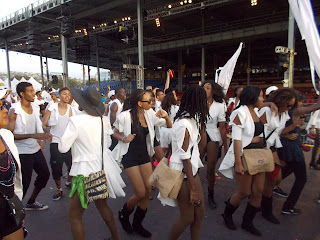 You know when you were with serious masqueraders when most persons refused to take off the blazer even when we felt like we were baking.  At some points especially on Ariapita Ave, it could have well been a winter coat that I was wearing, but for the greater look of the band I ignored the river of sweat on my back and chest.

It was also a really smart idea to eat along the route without an official rest stop which ensured that the band kept moving.  Some persons found this to be strange and harsh, but I would remind them that rest stops are a relatively new phenomenon.  Back in the day (and yes I am old enough to use terms like "back in day"), we ate and rested while waiting.  I really don't mind this since the band doesn't lose much parade time and sometimes the long rest makes you more tired.

Our lunch was a large Chinese chicken or fish meal from Wok and Roll.  There was also pizza from Pizza boys.  Both options were good.  For me, the drinks weren't a problem as I only drank water and lucozade.

There was a huge improvement with security which I have to applaud.  There was even an extraction team.  As far as I know, there weren't any incidents.

My major complaints about K2K on Monday were firstly, the upkeep of the restrooms which weren't very clean and lacked toilet paper.  This was especially important in a band made up of mostly women.  I also felt that there should have been handsoap, which is not really a big deal to provide. My second complaint was the music.  I didn't like that the DJs played very few songs. In addition, at times when the trucks were too close, there was an overlap of the sounds which was just a mess.  For a small band we only needed one DJ truck.

Overall, the positives far outweighed the negatives.  I had a great time on Monday, and I maintain that for me, a small band provides a better experience especially when the band is serious about their costumes.  Again, I'm glad that I was so wrong about K2K.....
Posted by cute dougla at 9:33 PM