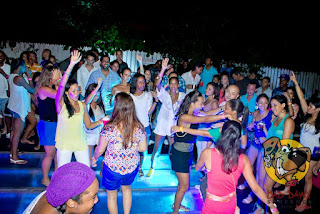 I heard about this fete pretty late but you know a Trini can't hear about a cooler fete and don't get excited. So almost immediately the planning for the contents of the cooler began. Mind you, I don't have a cooler, nor did any of the planners. So we decided to take Swappi's advice and get a bucket (since we can't afford to buy a cooler). But this excitement didn't last for long as we got a cooler borrowed from a good friend.

The fete was advertised from 4pm-11pm, but we got there around 8pm. Let's just say it was quite easy to get a parking spot at that time. By 9:30/10:00, the crowd came in but the fete wasn't ram; just the way I like it. The Constant Spring golf club's poolside was a smart choice as it accommodated the crowd and the coolers well.

Shotmaster J from T&T played for the most of the night and the tunes kept coming. Please note DJs in Jamaica, this is how you play soca, not the same 5 tunes playing over and over....He played lots of 2012 tunes, (which the crowd knew btw) mixed with some older songs which was cool.

I really enjoyed this fete especially the music. The vibe was nice and the drinks were flowing, which is one of the benefits of carrying your own. The cooler concept has definitely found a place in Jamaica and I look forward to doing this fete again next year...