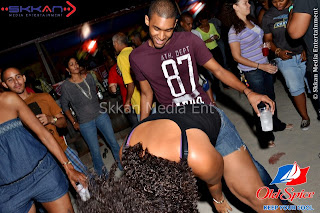 It's pretty clear that Mas Camp Fridays is facing some serious competition with alternatives such as Island Village and French Lyme. French Lyme was held on the last 3 Wednesdays at Barbican Beach with no cover charge (yay!). Although I only went to 2 sessions, I really enjoyed myself. It was also obvious that there seems to be no problem among the patrons with feteing on a Wednesday night.

On the first night, I was not impressed with the initial DJ (not sure who he was), who obvioulsy loves Bunji Garlin's Irregular, but the music picked up once Smoke took over with lots of new tunes. Another shortcoming was that the service at the bar needed to be more effecient. I also felt that the one toilet was insufficient. But I can't complain too much since the vibes were plenty and I can't ignore that there was no cover charge.

I hope French lyme makes a return next year, and if it does, I'm sure it will attract a much bigger crowd...

Again, the unofficial tdd photographer fire the wuk so I had to borrow a pic from SKKAN Media's page on fb
Posted by cute dougla at 8:39 PM