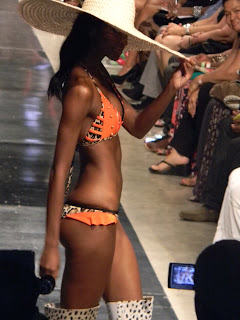 I know I've been saying that I'm not into fashion but I must admit that I like the Kingston fashion scene...I guess because I like posing and in the Kingston fashion scene everyone is a mogel (that is Jamaican for "model"). But Pulse's Caribbean Fashion Week is the real uptown Kingston must be eeen kind of scene. I've been to the event 2 years ago and enjoyed the Jamaican touch to the generic fashion show.

What's with these fashion shows and the late start? The show was scheduled to begin at 7:00pm and didn't do so until an hour and a half later...steups. I was pissed because it was really uncomfortable sitting on those non padded bleacher seats in the National Indoor Sports Arena..that's a big fail for Pulse. During the show, the long breaks to accommodate those sitting near the runway was also really annoying; I didn't understand why people had to get up EVERYTIME there was a break and then we had to wait forever for those same persons to be seated for the show to resume. I also felt that they needed to integrate the performances into the show rather than leave the performances for the end when the majority of the patrons had left.
Despite these drawbacks, I enjoyed the event and the presentations with my favourite being Meiling, Zaad and Eastman, the Cloth and Shanna Carby, the winner of Mission Catwalk (a local Project Runway). The pieces looked like something I would wear and not just some weird couture piece that belonged on Lady Gaga. Oh how I wish I could own some of those Meiling dresses!
I also like that the Jamaican fashion scene is just as much about the top models as it is about the fashion. It's amazing that Kingsley Cooper has promoted so many Jamaican models on the international market. In fact Mr Cooper has contributed to the destabalization of popular concepts of beauty which has found a space in the global fashion world.
But the real winners were the Kingston fashionistas. I mean these patrons would not let the models outdo them...bless up to all the mogelers...
And the best part of the show was Machel Montano which was the most impressive thing Mr Cooper could have done for me that night. Machel sans HD gave a great performance and drove the small crowd into a frenzy. The performance was so intimate that your girl got to wine on stage...who knew?

**you could view more pics on Stush's fb page
Posted by cute dougla at 7:20 PM