Although I wasn't too keen on Bacchanal Jamaica's events this year, I had to go to see Bunji and Fay Ann.  This was my first time at the new mas camp venue which I really appreciated, especially the parking, so there was no hassle to park on the streets.  On another note, I wonder what happened to the guys who made money off of parking near the old mas camp?

I always opt for VIP if I'm going to a performance night.  The area was big enough with an adequate view of the stage. VIP included drinks and food.  I got enough drinks, but I had to wait too long because the bar service was way too slow. I also didn't get any food which didn't seem like enough in the first place.

Bunji and Fay Ann's performance was on point as expected.  I really like that the Jamaican audience is in love with Bunji's Differentology.  Fay Ann also got love from the audience.  Her voice was powerful as ever without much help from backing tracks. It seems now that it's hard to get artistes who cannot sing on their own.  Bunji delivered his major tunes and did a little freestyle.  After almost 2 hours of non stop performing, the crowd was not ready for the show to end.  And the funny thing is that they still had songs they hadn't even performed yet. 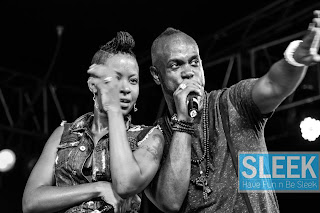 After the performance, I limed for about another hour while DJ Richie Ras played. Richie is up to date with his play list and his mixing skills are impressive.  Finally, a Jamaican DJ that gets it!

This was a great show and I really enjoyed it especially with my Trinbagonian posse.  I just hope that Bacchanal can do more about the food and drink in VIP.

**pic is from the Sleek fb page.  Check them out for more pics
Posted by cute dougla at 1:54 PM