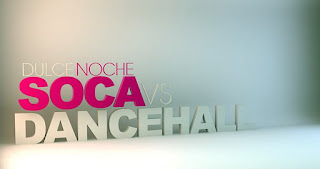 Soca in December in Jamaica is slowly becoming popular, so I decided to check out the Soca Vs Dancehall fete at Morgan's Harbour on December 3rd. The fete is new to the Ja soca scene but attracted the usual soca crowd.

On arrival, the venue was empty and the music lame. Again, I will stress that Sparkles Disco and Omar C are weak soca DJs. So the music was pretty lame with poor track choices. When I saw DJ Smoke from Renaissance, I was really happy because he is way better than those two. The venue filled up a bit and the music picked up. Smoke had the crowd's attention with latest soca and hip hop. By the end, you could hear persons shouting "soca! soca!", which made me smile :)...there had been a clear winner.
I love the venue although it is a bit out of the way. I also appreciated that although it was a drinks inclusive affair, there was the option to purchase higher end drinks.
I can see a future for this party if the promoters step up their marketing and probably get some prime sponsors behind them....
Posted by cute dougla at 7:47 PM

Labels: places to go in Kingston, Soca Vs Dancehall