Once Upon a Dynasty- Bacchanal Jamaica's Launch 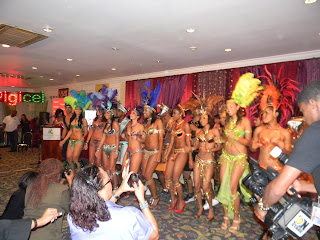 Trini dougla diaries big this year because we were eeen the Bacchanal Jamaica media launch last night! So we are a step closer to being recognized as "official media" for carnival in Jamaica. Everything to be expected from a launch was delivered: a well decorated space; brief comments from the corporate sponsors, Bacchanal and the Minister of Culture; LATEST soca; food; nuff smirnoff and of course, the costumes.
I have to address the opening comments made by the Honorable Olivia "Babsy" Grange Minister of Information, Culture, Youth and Sport (yes, she has a large portfolio). The Minister first praised Bacchanal for developing the carnival culture in Jamaica. However she also praised them for bringing Jamaicans from uptown, downtown and the inner cities together...now I'm not too sure who wrote Babsy's speech or even if Babsy knows a lot about Bacchanal Jamaica but one thing I know Bacchanal does, is bring together the whole of uptown and the upper middle and definitely not the inner city...Probably someone can correct me on this.
She also made a call for Bacchanal to start producing their costumes here, not just assembling them but the costumes should carry a "made in Jamaica" tag...now Minister, unless we start killing birds for their feathers, China and New York will always be a necessary source for costume materials. Have you considered the labor cost for mass production of costumes in Jamaica? and how will this affect the cost of the costumes especially since there are so many "inner city" and "downtown" masqueraders....
Now on to the costumes.....the costumes did not look that much different from the pics on the websites. I would confidently declare that this is the year of the green (and variations of green)! I can't wait to see the greens on carnival day... But what was up with the models? Why didn't someone train them? If you are modelling a costume, you need to have some vibes which most of lacked....some of them actually looked bored and tired....Anywho, my fave teal was Atlantis mainly because of the color scheme and the embellishments on the bra reminded me of a Spice costume. Atlantis is really moving forward with a contemporary touch to their design and even offering a Frontline option. I also really like Bacchanal Babes' Princess of Persia which has a fabric lined bra with beads connecting the bra to the bottom piece. Frenchmen's Avalon also stood out; I like the color combination which is really bright and blinged out....Let's just say that Digicel's costume remains the worst in the bunch for yet another year.
On the fete side, Bacchanal has confirmed Kes the band, Shurwayne and You, Bunji, Faye Ann and the Asylum band, Imij and Co., Benjai and of course their must have, Destra for beach j'ouvert. I was really hoping for Machel at beach j'ouvert again...oh gosh that was the best beach j'ouvert EVER! I don't think the mas camp crowd is familar with Benjai although he's doing well in T&T but I know the Trinis will be up front and centre...i za trinee ah trinee...woiiiiii!
On another note, if you haven't registered, you better move quickly because Atlantis and Frenchmen's Avalon and Shangri-la are all sold out....I suspect Babes and Macedonia will be next and if you are not registering online, they are only accepting cash at the mas camp...no card!
So thanks to peeps at Bacchanal who never brace me at the door to the launch.....
You could check out more pics on my FB page here
Posted by cute dougla at 7:13 PM