Sunny Side Up Breakast Party 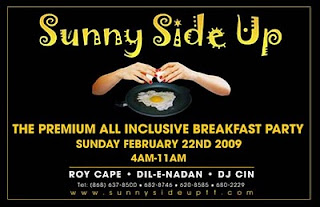 Àfter a severe case of heart burn and difficulties with waking up at 3am, I was on my way to the Sunny Side Up breakfast party in Petit Valley. This fete is a definite do again next year. I like that the crowd had good vibes and was within my age group.
The parking was a bit difficult so I would have to get there earlier next year. There were actually breakfast dishes such as bagels, pancakes, eggs and toast, sada and doubles. You could also get pelau, corn soup, seafood broth, fruits and cholcolate covered strawberries and marshmellows. Most of the major dishes were finished quickly but the drinks were endless.
On the music side of the fete, it is safe to say that Dil-e-Nadan has made a successful crossover from a soca-chutney band to a soca band. Raymond Ramnaraine, the band's leader once said that band is not Indian or African but Trinidadian; which is true. They had the crowd excited while they covered a lot of the popular soca and chutney songs. The band's vocalists meshed well and were genuinely enjoying themselves on stage. I'm really glad to see that Candy Hoyte can finally showcase herself as a frontline singer instead of providing back up for Shurwayne. Roy Cape with Blaxx, Olatunji and Rita Jones followed with a similar set. Big up to man like Roy Cape who re-hired Rita Jones after she bad talk the man in all the newspapers in Trinidad! But seriously, Blaxx, I know you all performed at three fetes earlier but you don't need to sound like it. Imagine Olatunji had more vibes singing back up to Blaxx Hunting than Blaxx did as the main vocalist. Eventually, Blaxx and band concluded the fete with an okay performance.
Did the organizers of Sunny Side Up get permission from WASA for their wet zone? The wet zone had a foam section and water being hosed seeing that there's a drought and all...
Some tips for attending a breakfast party:

I left about 10:45am and surprisingly I wasn't that tired even though I slept the entire day...but I will be watching the Dimanche Gras later...
Posted by cute dougla at 7:20 PM