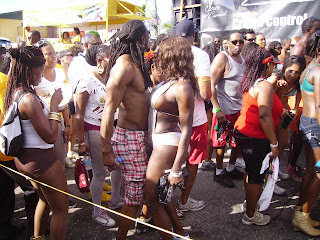 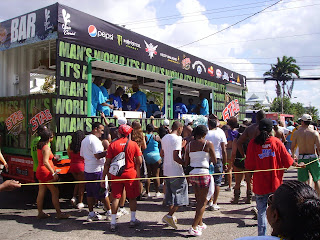 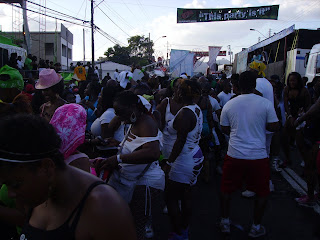 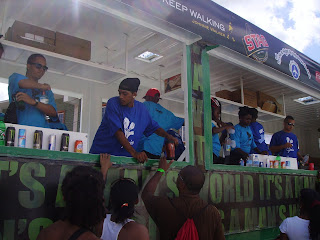 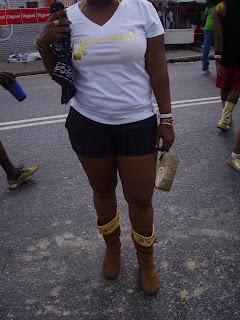 This was probably the hottest carnival ever in Trinidad! But the weather never stopped the heavy palancing...for some reason I prefer being on the road Monday. I met the band at their QRC rest stop at lunch time right after they crossed the stage. Now, it is fair to say that the band has grown A LOT and we Spice veterans were not accustomed to these numbers. I waited about 15 minutes in one of the lunch lines until we were told that the lunches for that line were finished and more were coming from Long Circular Mall! I then opted for the Arabian meal; I'm not really fussy about food but this had to be driest meal ever. I'm a big fan of Arabian food and I know that it does not have gravy or sauces but this was not just dry but burnt. Because it was so hot my throat was already dry and this burnt, dry meal just made it worse; so I drank three cans of fruta and hoped that would help my hunger. According to one of the security guards, ah doh want no meat on no toothpick just geh meh some pelau!
Because there were so many people, we needed more seats at the rest stop or at least blankets for people to sit on. The seating space was obviously limited which forced people to sit on the dusty ground or stand and eat which was very uncomfortable. There were a lot of the portable toilets at the rest stop but no one bothered to replenish the toilet paper, clean them or even have soap at the sinks.
We were back on the road about half of an hour later, heading to Ariapita avenue. The music was excellent..good job Rapid Response! We got a mix of the old and new and Palance was saved for the stage.
Drinks were flowing and the bars were sufficient even though I could not reach any of them. The security personnel were out in their numbers and kept the outsiders at a distance. Kudos to Spice for providing very efficient security.
I really hope that Spice could provide Monday wear that consists of more that just hot shorts to ensure some uniformity in the band. The Spice tshirts could have been provided in colours that matched the sections so that they would have been more coordinated.
I left after the downtown stage around 6:00pm to prep for more Palancing the following day!
Big shout out the "girl" with the biggest batty in Spice..if yuh have it why cover it!!!!
Posted by cute dougla at 8:47 AM