K2K's 2014 presentation, "Vie: The Rise of the Sanctuary" aimed to use birds to depict a specific life virtue. So it was only fitting that we were asked on Carnival Monday to represent birds of paradise.  The costume consisted of a blue and black chiffon shirt with oversized sleeves to mimic wings.  The shirt was worn with our own black bottoms, whether shorts, leggings, or bikini bottoms. Unlike many other bands, K2K had uniformity. A lot of bands tend to forget that Carnival extends to TWO days; therefore (in my opinion) masqueraders should be costumed for both days. I know I've said this before, but I hate when everyone in a band has on their own "Monday wear".  No matter how fabulous your individual Monday wear might be, it does nothing for the band on a whole which ends up looking like ole mas.

I met the band on Ariapita avenue after they crossed the QPS stage.  The numbers were small, but the masqueraders were having a great time. 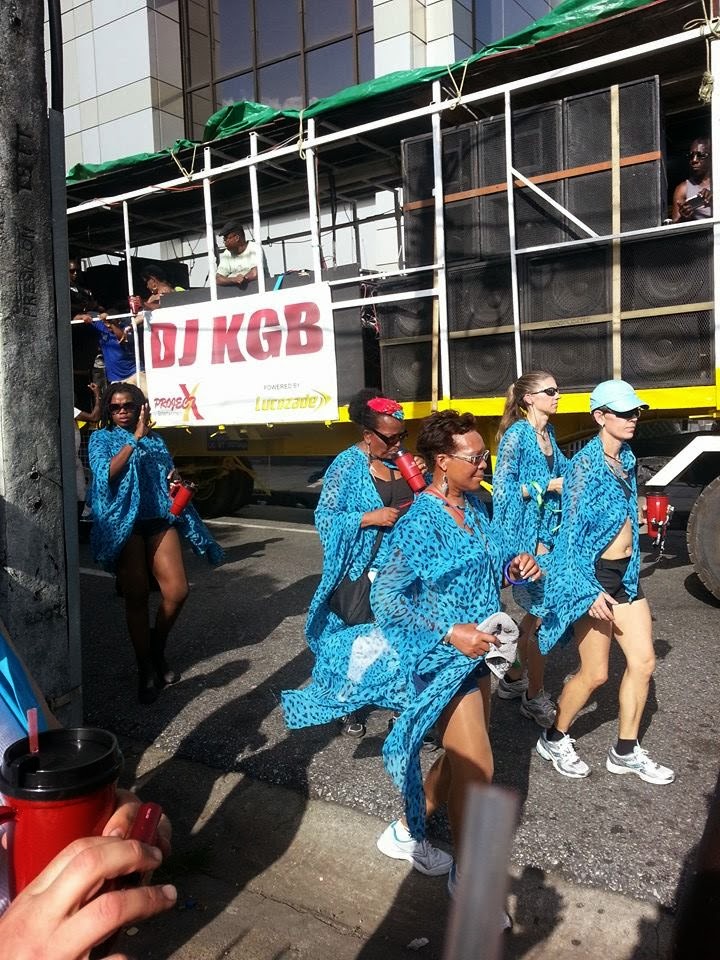 Some of  highlights of my day:
1.  The shirt was lightweight and very comfortable
2. My makeup was fabulous
3.  Lunch and afternoon snack were provided
4. No problem to get drinks
5. The most vibesy sno-cone man ever
6. The DJ played nice groovy tunes throughout the day
7. The band won in the medium category downtown
8. There's just a nice familiarity among K2K masqueraders that I haven't experienced with other bands

No big complaints but:
1. There was no coconut water
2. We could do with a little more masqueraders
3. I really don't want to hear Nappy's "Big People Party" again....ever

After my first year with K2K, I never thought I would be singing their praises 2 years later.  I'm glad I stuck with them because it's been a lot of fun so far.  In a time where it seems that the bikini and beads rule the carnival, K2K is refreshing balance...
Posted by cute dougla at 8:21 PM