Welcome to the House of Bacchanal 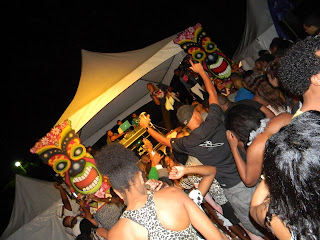 After not being to Pan Semis in 10 years, I was really clueless about the Greens. I am ashamed to say that I had no idea that the Greens and Pan do not go hand in hand. But I have to admit that the lime in the Greens is like no other especially if you moving with Caesar's Army who offered a package that included a tshirt, lunch, snacks and drinks. The Caesar's Army posse had lots of vibes, but I still wanted to hear more Pan. There was a small set up near the stage for persons who wanted the Pan exerience, but it was not an ideal viewing or listening position. If I ever get the opportunity again, I will definitely opt for the North stand.

Kes the Band at Normandie
Well if you have been following this blog, you will know that I LOVE Kees so there was no reason for me not to attend this show. I even got my Dad to purchase the tics before I got to Trinidad! The parking was easy and I got a good viewing spot once I was inside. On a side note, Normandie needs to reduce the number of chairs which just took up wining space. I mean who really wants to sit during a performance from Kees???
As usual, Kees gave a bess performance with some guest perforances from David Rudder, Shal, TC, JW and Blaze, Michelle X and Lord Nelson. I really enjoyed this show which was on time, well choreographed and just confirms why I love Kees. It was also a plus that Normandie always has reasonably priced drinks and yummy local dishes. The show was over by 11:00pm but the DJ played until about midnight. This show was another plus to arriving in Trinidad early.
Mai Tai
I was skeptical at first about Caesar's Army's Mai Tai on Sunday since there were no advertised performers and there was an animal print dress code. But then they released that Bunji and Benjai would be there. The female tickets were TT$300, which included drinks. It was a long drive to the venue, but once you got to the designated parking, there was a shuttle service to the venue. I must commend the ample security in the parking area and even at the venue. The premium drinks were flowing and there was little wait at the bar. Even though the fete was promoted as a drinks inclusive, we were treated to corn soup, douples and geera chicken. Well done Caesar's Army!
Machel Monday
I was looking forward to Machel Monday more than any other event since I've never attended this show. The biggest lesson learnt here is either get there very early or get someone to drop you because parking is a bitch. Showtime was advertised as 8:00pm, so we were there about 7:15pm which was very late. It took me almost 2 hours to find a spot close enough to the stadium until I eventually got a park in Movie Town for TT$40, which apparently is the new rate for parking. I would like to think that this TT$40 goes to Movietown management and not that security guard; yes I would fool myself with that one.
After missing Kes the Band *sad face*, I was finally inside the Platinum section which should have been called "General 2" because there was nothing special about this section- no drinks, food or vantage point included in the TT$500, just people and more people. The bars were over crowded and there extremely long lines for food. Let's just say that Machel made his money off us fools in Platinum.
Overall Machel gave his best proving why he is the greatest soca artiste in the world. Most of the guest performers were pretty good. I was actually surprised that I like Pitbull's performance. I wanted to hear more from the Iz from the Caymans. Benjai, yes I love you too-keep it up. Kerwin, you are the BOSS- Bacchanlist is my theme song! And Beenie man, you shoulda stay home...
Bacchanal Wednesday
After my Trini Posse experience last year, I said that Johnny Soong will not catch me with his nonsense again so I got a General admission ticket for TT$300 for Bacchanal Wednesday. Somebody please tell me when did they start charging to park on the beach opposite the Hangar in Chaguaramas???? And yes, the secuiry guards who apparently own or leasing the space charged the standard TT$40.
Once inside, I was happy that I was in General. I got a good spot near the stage and had a good view. Destra and her band was up first which can best be described as a lackluster performance. Remember that she was booed severely at this same fete 2 years ago, so I would think she would have done better. But the Bacchanal Wednesday crowd is tough and showed very little appreciation for Destra even when she drew for her old songs. Not even her Power soca contender, "Link up", did anything for this crowd. At one point, the crowd started chanting "Kerwin, Kerwin!".....no comment.
Kes the Band was better and got a better response, but the man who mash up the party was Swappi. I'm trying really hard to not like Swappi, since he just seems like he's pissed he wasn't born in Jamaica. But the bucket is the new must have item for Carnival....I left before Machel got to the fete.
What I did not like about this fete was the cost of the drinks. I mean, TT$50 for a Johnnie Walker and coconut water and the bartenders not even fulling the cup! That was a major fail. To top it off, you could only buy the drink chits in $100 batches. So the math is simply 4 drinks= TT$200. Bigger FAIL!

Blue Range
This was my first time at Blue Range which I would recommend as a good choice for carnival Friday. The ticket was only TT$250 and coolers had to be in by midnight. The parking was easy and there was a shuttle service to and from your car. This was a well organized event with great vibes. We even saw Bunji and Faye Ann, who gave their usual good performance. Chutney Soca Monarch, KI, also did his "Single Forever". I left about 3:30am so I'm not sure if there were more performances, but Blue range is a definite do again....

Sunny Side Up
Even though I had my tic, I had to miss this one *sad face*. Unfortunately, I became really ill on Saturday and had to even go to the doctor. Big up the Health Centre in Chaguanas where the workers wanted to go home and dealt with patients really quickly....And the sadder news is that I did not play mas today even though I had my gorg Monday wear and accessories. This was the doctor's order, but Tuesday will see me for sure even if it's not for the whole day!
Posted by cute dougla at 2:01 PM